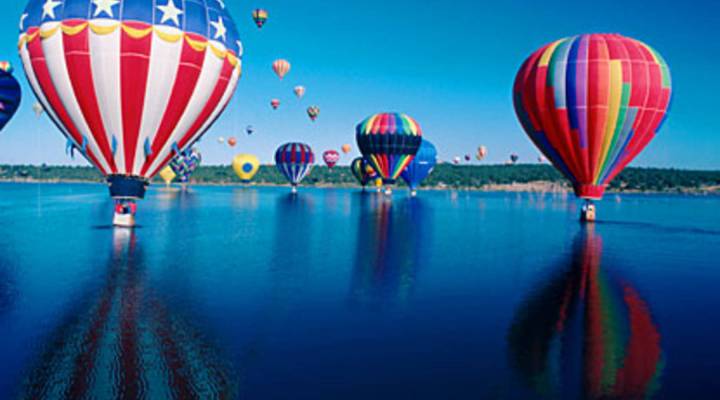 Banks are magic — they create money out of thin air.
They do it for their own good, of course. But by helping themselves they’re actually helping the entire economy.

If you have money in the bank, I hope you don’t think the bank just puts your cash in the vault and leaves it there until you want it.

Banks make money by borrowing from people — like you — and then turning around and lending that money out to other people — like me, when I want to buy a car or a house or a company. So long as I’m paying the bank more in interest than the bank is paying you, then the bank makes money.

And here’s where the magic comes in.

Imagine a field full of hot air balloons. If you’ve ever been in a hot air balloon, you’ll know that you have to carry a certain amount of weight to keep the balloon from going too high into the dangerous jetstream, where balloons can be ripped apart.

The same goes for banks. They need to keep a certain amount of money on hand, to stop them from getting into a situation where they can’t honor their obligations, ie give you your money when you want it back. The law says banks can’t lend out all the money that their depositors give them — they have to keep a certain amount in reserve. Say, 10 percent.

If you think of a bank as a hot air balloon, imagine you gave the banker a million silver dollars. The banker only needs ten percent of that to keep his balloon from floating off, so he puts that in a box in the bottom of the balloon basket, leaving him 900,000 silver dollars to lend out.

Just then, Mrs Jones comes up, and asks for a $900,000 loan, to buy a private jet. The bank lends her the money. Suddenly, the amount of money in the system has almost doubled. There’s your million dollars, that you have in the bank. And there’s the $900,000 thousand loan the bank made to Mrs Jones. Both are assets, both are real. The bank has turned a million dollars into $1.9 million, just like that.

Mrs Jones now drives out of the airport, and pays Sharif Aviation $900,000 for a Gulfstream V. That afternoon, Mr Sharif goes to his balloon bank and deposits the $900,000 he made from the Gulfstream V sale. The bank puts ten percent ($90,000) in his box in the bottom of his balloon, and lends the remaining $810,000, to a clothing manufacturer who needs to buy some new equipment.

You get the picture. There is still only $1 million in silver dollars in the system, and yet the banks’ ability to lend 90 percent of the money they’re given by their depositors has created more than three times the original amount.

The ripple effect that credit creates through the economy improves everyone’s ability to spend. Those cash reserves are the ballast that keeps the banks on the ground and safe. But what about your money? If so much of the money in the system is notional — just hot air, if you like — then how can you get your hands on it? What happens if everyone wants to get their money out of the bank at the same time? Ten percent ain’t gonna cut it when every depositor is lined up outside the door!

That’s where insurance comes in. Most banks are part of the FDIC, which insures deposits up to a certain amount. If you’re within that threshold and the bank can’t pay — the government will.