Stacey Vanek Smith: It was all supposed to come down to a vote yesterday on Republican John Boehner’s debt reduction plan — but at the 11th hour, quite literally, last night, the vote was postponed to today, even closer to the Aug. 2 deadline. Our New York bureau chief Heidi Moore is here to talk with us.

Vanek Smith: Heidi this has caused us a lot of grief. Remind us again, why do we need a debt ceiling?

Moore: A lot of people are wondering that, you’re not alone. It’s really strange — all year, Congress decides to spends its money on this or that. It’s the like the way you might spend a day shopping at different stores. Then at the end of the year, the treasury goes to Congress, with the bill, totaling everything up the way that you get a credit card bill. Then treasury has to ask Congress to just sign the bill. And Congress says oh no, we spent too much, we can’t possibly hand over all that money. But meanwhile, Congress spend the money already. So, the approval should just be a formality, but it never is. I talked to Tony Fratto, he’s a former treasury official.He had to ask Congress to raise the debt ceiling seven times. He said all seven were pretty high on the ridiculousness scale.

Tony Fratto: There is no point to the debt ceiling. It is really pointless. I always thought it was the most bizarre thing. This was like, in the Twilight Zone.

Vanek Smith: The Twilight Zone. Well, Heidi, I’ve heard of ways the President could just bypass Congress and raise the debt ceiling on his own. Is that possible — could he do that?

Moore: Oh, Stacey, if only it were that easy. The stakes are higher now. We need to raise the debt ceiling yes, so we can pay people. But all this fuss has also highlighted what a terrible credit risk we are, as a country. We borrow way too much. We make way too little. And Standard & Poor’s said they’ll downgrade us if we don’t come up with a long term plan to pay off our debt. 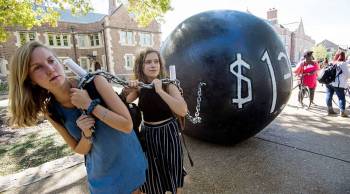