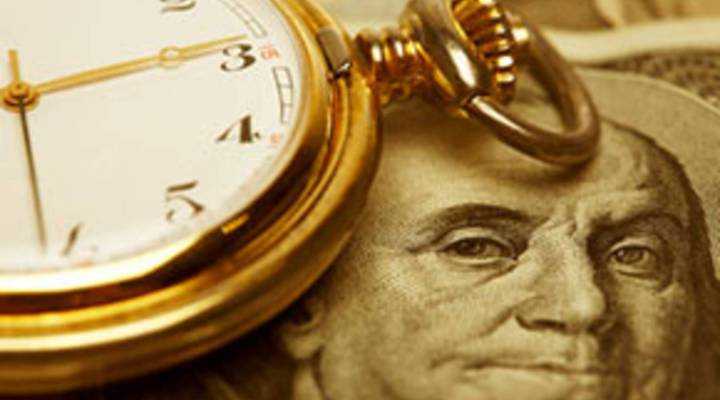 Wall Street waits to see what happens with debt talks

COPY
A clock on top of a $100 dollar bill represents keeping track of your money and watching your debt. iStockPhoto
Raising the Debt Ceiling

Wall Street waits to see what happens with debt talks

A clock on top of a $100 dollar bill represents keeping track of your money and watching your debt. iStockPhoto
Listen Now

Stacey Vanek-Smith: Financial markets are watching Washington this morning for signs of some kind of decision on the debt ceiling as the August 2nd deadline creeps ever closer. So far a compromise doesn’t seem to be happening. But the markets are keeping their cool for the most part. Here to talk debt-ceiling with us is our very own Heidi Moore. She joins us live here in New York. Good morning, Heidi.

Vanek-Smith: So a compromise still seems pretty far off, why aren’t the markets panicking?

Moore: Well, we’re walking into this with eyes wide open. The deadline is still eight days away. There’s a lot of time to prepare. We could still have cooler heads prevail and people are waiting for that. And the other thing is there’s no way to prepare if there is a Treasury default. If the crisis happens, treasuries are like cash — there’s nothing anyone can do to protect themselves.

Vanek-Smith: So when will investors start to react? When should we see that happen?

Moore: Basically when the deadline passes and even when it passes. We saw something like this in 1993. The debt ceiling didn’t get passed until 1995 and then there was a minor crisis. And even during the crisis, there was no blip in the stock markets. So I asked Josh Brown, a financial adviser in New York, how he’s preparing his clients for this and this is what he told me:

Josh Brown: We certainly don’t view this as something that’s going to have a long-term impact on bond markets or stock markets. We’re not planning people’s futures based on what’s going to happen in the next week or two, though.

Vanek-Smith: So it sounds like so far Wall Street is just watching to see what happens.

Moore: That’s basically it. There’s no reason to panic except to panic right now and it shows that the markets are working, that they are just taking it easy for the time being.

Vanek-Smith: And how does Wall Street view Washington right now? Are they just in shock or?

Moore: It’s an extension of the scorn both sides have had for each other all along. So it’s nothing new on that front.