Challenges ahead for China

Challenges ahead for China

Kai Ryssdal: Our series this week, The Five-Year Plan, takes us to China and the live broadcasts we did from there in 2006. We went back last month to see what’s changed for them… and for us. Just walking around China, it’s kind of easy to forget about the whole Communist thing. The capitalism here is in your face, to say the least. Which is why it’s no small irony that literally around the corner from one of the ritziest and most Western-style shopping centers in Shanghai is the first headquarters of the Chinese Communist Party — with tourists, Chinese tourists, lining up to get in.

Our guide, analyst Jim McGregor, explained as we talked on a rainy day.

Jim McGregor: This is where the Communist Party had its first meeting, but this developer from Hong Kong came in. He realized, I’m going to capitalize on this and he built this exotic shopping center playing on on the old Shanghai theme. Look around, I mean there are foreigners who live in Shanghai who never make it much more than six blocks away from this place.

Ryssdal: If Mao Zedong shows up today, in the middle of Xintiandi, what does he say to himself?

McGregor: This isn’t the kind of party he was thinking of.

The Chinese Communist Party’s doing pretty well for itself, even if Chairman Mao wouldn’t recognize it. Economic prosperity does go a long way toward political stability. But that prosperity brings with it a problem. How can the government keep meeting rising expectations, when a lot of people only know economic growth of 10 percent a year?

Searching for the answer to that question explains how we found ourselves on a Tuesday in Chongqing out in Sichuan province at a job fair.

Three times a week the local branch office of the Labor Ministry runs what’s best described as a speed dating service for jobs.

Twenty-three-year-old Ju Yin is on her third trip to the job market. She looked at me kinda funny when I asked her why she kept coming back. And then she said, because this is where the jobs are. There are posters plastered all over the walls — want ads, basically — job title, salary, qualifications.

Then, you head upstairs and if they like me and I like them, she says, we interview. And if they don’t like you, I ask? Then I look at other jobs, she says. No big deal.

Upstairs, Yuan Yan’s having no luck recruiting new hires. No applicants at all, she says.

Yuan Yan: Too many companies looking for people.

Thirty miles outside town at the Xiangling Auto Parts Factory, we found the same exact thing. The place is an OSHA inspector’s nightmare. And while spending six days a week in front of a metal grinding wheel isn’t our idea of a great job, it’s actually a big step up for 23-year-old Duan Yihua. He was working down south in Guangdong in an electronics plant, came back to Chongqing this spring for a 50 percent raise. He’s making about $500 a month here. The hours are regular — 8 to 5:30. One whole day off every two weeks. And plant manager Guo Jingyong says he’s still scrambling to find people.

Translator for Guo Jingyong: We don’t have too many choices. They choose us.

Translator for Jingyong: Before, we set some requirement, like they have to be high school graduate or they have to be under 30 years old. But now we hire people over 40, over 50. The oldest workers here are over 60.

Most of the workers are serial job hoppers. They’re looking for better hours, more money, or both. The government getting people off farms and into factories — making more money — is objectively a good thing. But at the same time, having better lives has made a lot of Chinese a whole lot pickier about how they want to spend their time.

Scott Minoie: A hundred percent, for us, in five years salary increase.

We met Scott Minoie when were in China five years ago. Back then, his restaurant chain Element Fresh was just a single store — catering to Westerners looking for something familiar to eat. Now, sitting in his tenth location smack in the middle of Shanghai, he shares the exact same frustrations as Mr. Guo, the plant manager back in Chongqing.

Minoie: There’s a lot of employees that just simply don’t want to work in this industry. A lot of the countryside people that are moving into Shanghai. They also have grand dreams of being a CEO one day and they come in and they’re like, what, you mean I have to start out at the bottom?

Minoie tries to keep up. He tells people they’ll get regular raises, time-and-a-half overtime — all kinds of perks relatively foreign to Chinese places of employment. But it just doesn’t seem to matter.

Minoie: People don’t think about their future as much. They think about, well if I go take the job across the street and it pays me 200 RMB or more, I can save up for that iPhone that much quicker. Everyone here has become so much more materialistic pretty quick, and that’s what’s driving a lot of the consumption as well.

So here’s the ultimate challenge. For a country that built its economic engine on the idea that it’s cheaper for companies to set up shop here, what happens when it’s not? What happens when wages go up because workers can be choosers? The government has a tricky time ahead, lifting people out of poverty, keeping foreign companies here, and making sure more people prosper.

McGregor: The only way the Communist Party survives as a leader here, is bringing that next billion into the middle class. I don’t think people here are going to settle for a rich elite and a repressed lower class.

It’s that economic prosperity brings political stability thing. Which is our China theme for tomorrow: the broad middle ground of the Chinese middle class.

Ryssdal: We were taking pictures and shooting video the whole time we were over there. You can check ’em out and hear other stories in our series, The Five Year Plan. 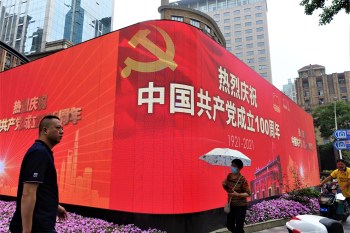