How to deal with a real ‘Horrible Boss’

How to deal with a real ‘Horrible Boss’

Tess Vigeland:
Anybody going to see that new movie Horrible Bosses this weekend? My hand is not up, but here’s a preview.

HORRIBLE BOSSES CLIP:“You know for months you’ve been hinting that I was in line for that promotion?” “And look how hard you’ve been working.” “Were you just lying to me?” “Lying? No Nick, motivating. We’re all part of the same team here. Plus I’m the one that’s going to be doing all the extra work.”

The universal nightmare of working for a bad boss gets the full Hollywood treatment, hitman and all. Most of us just, you know, take it. And here’s what some of you told us about your experience with the corner office:

Jeffrey Hayes: Jeffrey Hayes from New Rochelle, N.Y. Yes I’ve had a bad boss. We hired a new office manager, and she just totally turned the office upside-down. I had a run-in with her. She gave me a bad review, and I asked her: did she really know what I do? And she said, ‘No, I don’t, and I really don’t care.’ Next thing I know, I’m gone. I was angry at first, but I moved on and got a better job.

Laura Hughes: I live in New Jersey, and I have to commute with the bus. When I was a lot younger, I worked for Verizon, and all the other bosses that I had would let me come in 15 minutes early and leave 15 minutes early due to my bus schedules. And then I got put to another department and this woman, she was just, ‘I don’t care, I live in New Jersey too. Deal with it.’ She was kind of rough. I was only 19, so I was a little sensitive to her. But besides that, I feel like I’ve been pretty lucky.

Michael Thompson: I had a boss that was so bad, because he used to give us a hard time, always threatening to fire us and everything. So I caught him going to the Jiffy John and me and a couple of my buddies, we pushed the thing over on him. And you know something? We had no problems with him ever since. He was a real nice boss after that.

Rico Harris: My bad boss experience was when I was in Dallas, Texas. I was working at a club and my boss would withhold our tip money, and we were supposed to get paid on Friday, but he would hold it until Monday or Tuesday of the following week until he was done using it for what he needed to use it for. We kind of knew something foul was going on, and eventually it came to light, and you know, nothing really happened. He just kind of changed his routine. But I would have to say that was a pretty shiesty thing to do, you know?

There are, of course, adult ways to deal with a difficult boss, and Alison Green is here to talk about some of them. She writes the “Ask a Manager” blog, which tackles workplace and management issues. Welcome back.

Alison Green: Thanks so much for having me.

Vigeland: Beyond some of the obvious stuff, what is a good way to deal with a bad boss?

Green: I think one of the key elements no matter what type of boss you have, no matter what your frustrations are, you want to get really clear in your own mind of what you can and can’t control. And if you just accept that certain things are just the reality of your boss’s working style, then you can focus less on what might be a pretty fruitless battle to try to change her and more on ways you can work effectively in that context.

So, to give you an example, let’s say that you have a manager who’s just really busy, and she’s pulled in a bunch of different directions and she’s always canceling these regular weekly meetings, so you can never get her attention when you need it. So, if you accept that that’s just the way she is, and you’re not going to change her, then you can start thinking about what you can do in that context. Maybe you start anticipating that she is going to cancel on you. When you run into her in the hallway, you grab her for a minute and you ask the most important questions you have.

Vigeland: What about if you’re faced with a truly terrible person? You know, you hear these nightmare stories that actually aren’t far off from what I’ve seen in the trailers for this movie. You know, aside from going to H.R., what other recourse do you have, and at what point does that become mandatory?

Green: You know, I think you have to be really clear on what your own bottom line is, and it’s different for everyone. But you’ve got to step back, take your emotions out of the equation and try to figure out what you really can and can’t live with. And if something you just hate about your boss isn’t going to change — she’s just a terrible person — or she’s crazy, which is something that really happens, your next step is to decide whether you can live with that and still be reasonably happy. And if you can’t, you’re probably better off accepting that so you can look for ways to move on. But a lot of times, if you just accept a bad boss as part of the package, you can find yourself living with it more comfortably. For instance, maybe you hate your boss, she’s a terrible person, but you have a really short commute to work and you love that. You might ultimately decide you want to keep that short commute, even if it means that your terrible boss is part of the deal.

Vigeland: And I guess what the real complicating factor there is that any boss you have has so much power over your future. And, if you’ve got a bad boss, confronting them is probably not a good idea, because they certainly have power over raises and promotions and things like that. How do you deal with that power structure?

Green: It’s easily the hardest part of the dynamic, but I do encourage people to speak up if they’re unhappy. Try to do it unemotionally, be smart about it. You’ll want to bring it up in a time your boss isn’t swamped or frazzled or in a bad mood. You want to think ahead of time about your delivery, not just wing it. The same way you would want your boss to do if she were raising something sensitive with you.

Vigeland: I’m guessing you also get some questions from managers. What are they saying about how we should be dealing with them? I mean, I’m sure they all feel that they’re awesome.

Green: They do, they think they’re great. Uh, no, actually, I think people tend to forget that their boss is human. There are going to be times she’s grouchy, or just not doing her job very well, or frustrated or frazzled. And some of the letters that I get from bosses show insecurity. They have someone who’s not performing and they’re feeling insecurity that they can turn it around. So I think from the employee side of it, recognizing that your boss is human and you could be in those shoes some day can sometimes give some helpful insight.

Vigeland: Have you ever had a bad boss?

Green: I have had a ton of bad bosses. I always tell people everything I learned came from watching what not to do.

Vigeland: Well, I’ve had four workplaces in my life, and two of them had questionable bosses. Of course, my current one is the best one ever.

Vigeland: Alison Green writes the blog “Ask a Manager” and she’s the author of Secrets of a Hiring Manager. Thanks so much, it’s been fun.

Green: Thanks so much for having me.

RELATED: Want to meet some good bosses? Marketplace’s Chris Farrell introduces us to some of the best in the business. READ MORE 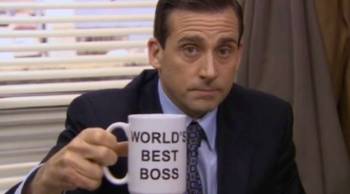 The Conversation: Love or hate your boss? Tell us why.