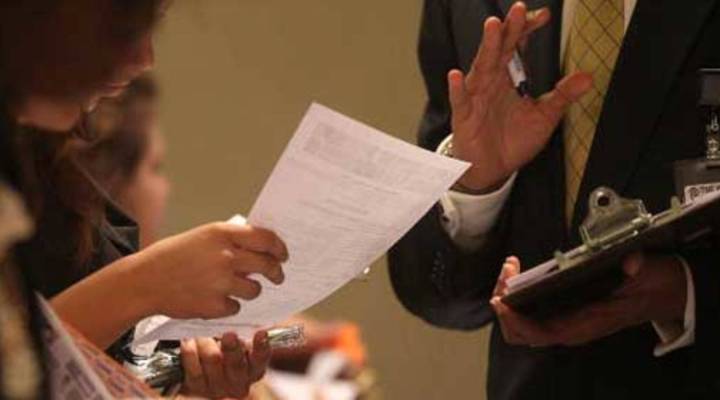 Tess Vigeland: Today, the Labor Department said the unemployment rate edged up to 9 percent from 8.8 percent in March. That’s based on a survey of households. But economists place more stock in the employer survey and that showed 244,000 jobs added to payrolls last month.

For private employers, it was the best hiring month in five years. Is the sun finally coming out? Here’s Marketplace’s Stacey Vanek Smith.

Stacey Vanek Smith: The last couple years were really tight for John Scrofano. He’s the CEO of Seattle based start-up Nearlyweds, a website that helps brides-to-be plan their nuptials. A major chunk of it income comes from ads — and Scrofano says, those dried up.

John Scrofano: We were tight and did not make a single hire in ’09 and the first three-quarters of 2010.

But the advertisers are back, and now Scrofano is looking to fill four new positions. He says a lot of his fellow small businessowners are doing the same.

Scrofano: They’ve just gotten to the point where they feel confident enough that things will return, that they’re hiring, because they’re just so tired of having to do everything on such a small staff.

Since hitting a low point in February of last year, the U.S. economy has added 1.8 million jobs. Eliot Devila is an economist at the Bureau of Labor Statistics.

Eliot Devila: Most of the gains were concentrated in retail, trade, health care, amusements and gambling industries, the hotel industry.

While government jobs have declined, private companies are snapping up workers at the fastest pace in five years. Ken Goldstein is an economist with The Conference Board.

Ken Goldstein: What this is telling us is that this recovery is now putting down some foundation. It’s not going to be great, but we certainly have a recovery underway.

There’s still a ways to go. Roughly eight million jobs were lost in the economic downturn. Goldstein says it will take several more years of this kind of slow and steady growth to gain them back.