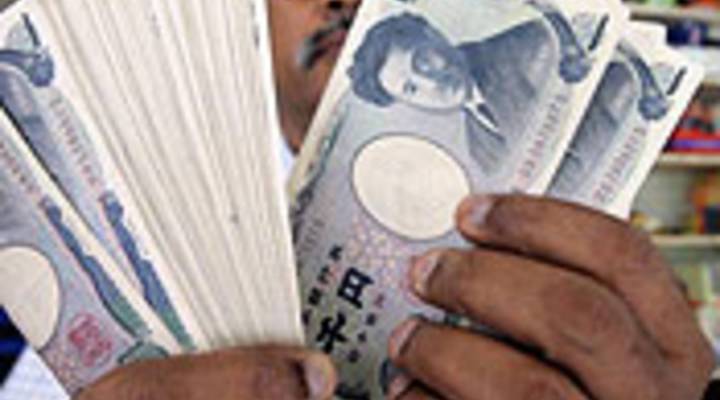 Kai Ryssdal: It’s a rare thing for an international meeting of finance ministers to agree on anything and to agree quickly.

So the decision last night by the G7 countries to step in and try to control a rapidly appreciating Japanese yen is an indicator of how serious they thought the problem was. The yen spiked to levels not seen since World War II earlier this week, mostly a panic reaction by currency traders, but a potentially real threat to the Japanese economy as it tries to recover.

As we continue our coverage of the disaster and its economic aftereffects, Marketplace’s Stacey Vanek Smith takes a look at how and whether a cheaper yen might help.

Stacey Vanek Smith: Even as Japan’s stock market lost nearly a fifth of its value earlier this week, the Japanese yen got stronger and stronger — hitting an all-time high against the U.S. dollar. That’s because investors expected Japanese companies, like insurers, and citizens to begin pulling money in from overseas to help deal with the quake.

Eswar Prasad is a currency expert and economist at Cornell.

Eswar Prasad: So essentially right now there is a demand for more yen. And when the demand for yen increases, then the price of yen rises.

A strong yen might sound good, but it makes Japanese products more expensive overseas. Toyota estimates that for every yen the currency rises against the dollar, the company loses 30 billion yen in earnings. So the G7 countries stepped in with a plan to sell off yen, pushing it down against the dollar and the Euro.

Marcus Noland: What the G7 said was, we can’t fix your nuclear reactors, but at least we can make sure you don’t get whipsawed in the exchange market.

Marcus Noland is with the Peterson Institute for International Economics. He says an expensive yen hurts everyone, from carmakers to cell phone and laptop companies, that rely on Japan for parts.

Noland: It could wreck havoc with the Japanese economy and then through that spread to economies in Asia and further around the world.

Prasad: And trade is the one thing that’s helped the global economic recovery.

Prasad says it’s important to do whatever is necessary to prevent the world’s third largest economy from slipping into recession.