The killer cure for alcoholism in Russia

The killer cure for alcoholism in Russia

LISTEN: The audio for this story begins at the 18:56 min. mark in the audio player above.

Kai Ryssdal: Alcoholism and Russia have a long and destructive history together. Alcohol abuse costs that country half a million deaths a year, most of them men of working age. It also costs billions of dollars in lost productivity. Male life expectancy in Russia is just 60 years, and the Russian population is predicted to shrink nearly 20 percent by the middle of the century, in part because of the drinking. Every problem, though, creates a market for a cure.

Our health care correspondent Gregory Warner traveled to Moscow to track down one very popular cure — and the doctors who sell it.

Gregory Warner: For me, this all started with a story I heard about a friend’s ex-boyfriend. A Russian alcoholic who promised he’d never ever drink again. Story was he got a capsule surgically inserted under his skin. Some kind of chemical compound, such that if he drank that capsule would explode into his bloodstream, and kill him.

When I got to Moscow, I found out there are dozens of clinics that do this procedure. I visit one of them with my translator Anna Masterova.

Warner: So is this the waiting room?

It’s a nice place. There’s a fish tank in the waiting room, lush carpet and a list of treatments on the wall.

Masterova: They have all kinds of massage, like craft therapies.

And then, we’re summoned to the office of the head doctor, Vyacheslav Davidov. He’s got a pinstripe suit, and bright, bright green eyes.

Vyacheslav Davidov (via translator Anna Masterova): So usually this capsule is inserted into the buttocks.

That is, under the skin of your buttocks.

Davidov: Actually that’s why it was called a “torpedo” because it is placed in a person’s butt and kept the way a torpedo in a submarine is kept.

And then, if you have a drink, watch out.

Davidov: One can never exclude death, but of course the doctor is not going to kill his patient. But the person will feel very bad, extremely bad. You will have pains, almost unbearable pains.

Davidov: And these medicines can remain in the body from a short period of time to three years, for instance.

Warner: Is the capsule in some way a placebo?

Nyet, it is not a placebo.

Davidov: If you don’t believe, I can give you a pill for one day.

I said I’d take the pill.

Warner: Can you give me a pill that would last three years?

Davidov: If you agree!

Here’s why I agreed. I couldn’t leave Davidov’s office without seeing the capsule and figuring out what’s in it, but the whole time we’d been in his office, he wouldn’t show me the pill or any of the clinic. The only way I was going to be able to see this supposed medicine was to agree to take it.

Masterova: You will be patient, you will be a patient.

So we leave his office, head upstairs, down this long hallway. There’s a sound of screaming. He leads me into the procedure room. Just like an exam room in a doctor’s office — got the white furniture, the sterile instruments. Except against one wall is this old green leather chair with thick straps that go on your arms and legs. He tells me he’s going to strap me to that chair, give me a pill — with the same medicine that’s in the torpedo — and then he’ll test it.

Masterova: So you take a pill and he will give you a drop of alcohol.

This is called a “provocation” because he puts just a drop of vodka on my tongue. Once that drop of vodka hits my tongue, I will feel all those symptoms. Next to the chair I see a defibrillator.

Masterova: In case when we do provocation, something happened, so we’ll be able to…

Warner: Maybe, can I take it at home?

So I, uh, chickened out.

Warner: Actually, no, I don’t want to take it. I can’t do it. I’m not strong enough.

He at that point realized he had won, and he shows me the pill at this point.

Masterova: This is what is inserted in the body.

So, it turns out, that inside that little pill is a very real drug, it’s called disulfuram.

Eugene Raikhel: It was actually a substance that was used in the rubber industry.

Eugene Raikhel is an assistant professor at the University of Chicago.

Raikhel: And they found that the workers in the rubber industry were unable to tolerate alcohol.

Disulferam blocks a certain enzyme from being absorbed by the liver, so when you drink it causes all these very real symptoms. But it’s only in Russia that they sell these very long-acting capsules.

Raikhel: Basically they tell you that they are injecting a long-acting form of disulfuram, which is not something that exists.

It does not last three years. In fact, it barely lasts a week. But…

Raikhel: This is not fringy at all.

He says up to 80 percent of addiction treatments by Russian doctors are procedures like this torpedo.

Meaning this is more popular than Alcoholics Anonymous and every other kind of treatment combined. Even my interpreter, Anna, her uncle was an alcoholic.

Masterova: He could go fishing and then disappear for a night, and nobody knew where he was. I mean, everybody knew that he was drunk.

Masterova: I don’t know how it worked, but it did work for him. Because he hadn’t drunk for the rest of his life.

Raikhel: Here’s the distinction: in North America, the prevailing understanding of addiction is it’s not about the substance as much it is about the face that you’re out of touch with some truths about yourself and your condition.

Whereas in Russia, he says…

I just have to get rid of my addiction. Which is what Dr. Davidov offers. When he gives you that pill and he puts that drop of vodka on your tongue, he scares that part of you into submission.

Masterova: And what rules this world? Fear!

For this service he charges 5,000 rubles — $170. And if, a few weeks later you ignore his warning, you do take a drink, and nothing happens? Then you call up Dr. Davidov and he’ll tell you that…

That torpedo poison is loose in your bloodstream. It could cause a heart attack, or cancer. And you need to purchase the antidote.

Warner: And how much is the antidote?

Davidov: If you want to drink, you have to pay!

Kai Ryssdal: Gregory’s story was a collaboration with Radiolab, which is produced by WNYC and distributed by NPR. Listen in the player below. 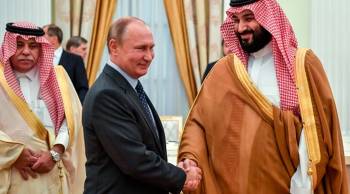 Will the Saudi-Russian oil alliance hold as production cuts are mulled?