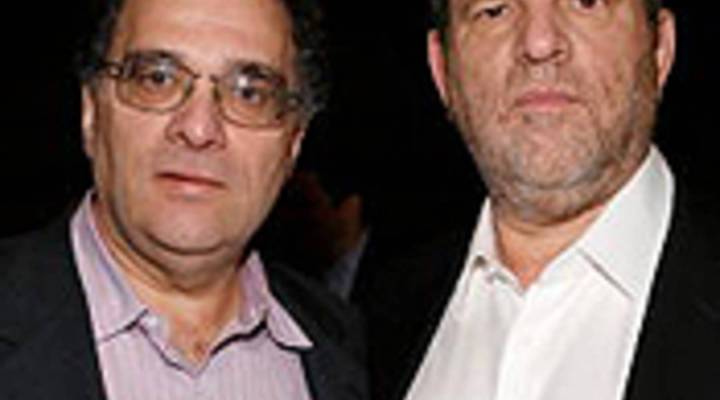 Weinsteins back in the Oscar game

Weinsteins back in the Oscar game

Kai Ryssdal: Tomorrow’s the big day. Speeches will be made. The politics are going to start in earnest.

Yeah, I’m not talking about the State of the Union. I’m talking Oscar nominations — 8:30 New York time, way too early out here on this coast. There will be celebrations in all the appropriate places. Including, expectations are, by Harvey and Bob Weinstein. The brothers famously started Miramax back in the late 1970s, and became known not just for their Oscar-winning independent films but their cutthroat Oscar campaigns as well. Then Disney bought ’em.

But Marketplace’s Stacey Vanek Smith reports the brothers are back with a vengeance.

Stacey Vanek Smith: The Weinstein brothers took independent movies out of the arthouse, into the multiplex and onto the red carpet. Miramax had an amazing track record: “Pulp Fiction,” “The Crying Game,” “Shakespeare in Love.”

Porter Bibb is an analyst with Mediatech Capital Partners.

Porter Bibb: Harvey Weinstein is probably the best marketer in Hollywood and he has a great eye for pictures that really grab the nominations.

Weinstein became known for getting enormous press coverage for his movies. His awards season strategy was dubbed “The Full Harvey.” And it worked, says Syracuse University’s Robert Thompson.

Robert Thompson: Once upon a time, it’s like you couldn’t listen to an acceptance speech without them being thanked, and then, of course, that kind of turned around.

Disney bought Miramax in 1993. The relationship soured and about five years ago, Disney tossed the Weinsteins out. The brothers started The Weinstein Company, but things did not go smoothly, says Sharon Waxman, editor of TheWrap.com. We reached her at the Sundance Film Festival.

Sharon Waxman: They burned through hundreds of millions of dollars; their movies didn’t work. They were getting into all kinds of businesses that is not their core competency.

Investors agreed to refinance The Weinstein Company, provided the brothers stick to what they know: the movie business. Several Weinstein movies are up for awards this year, including “Blue Valentine” and “The King’s Speech,” about George VI’s paralyzing stammer.

Clip from “The King’s Speech”: “Because I bloody well stammer!” “Do you know any jokes?” “Timing’s not my strong suit.”

The “Full Harvey” also seems to be back in effect. When Blue Valentine got an NC-17 rating — the kiss of death in the movie industry — Weinstein launched a massive campaign to overturn it and succeeded.

Bibb: The Weinstein Company and brothers are back big time and they’re not going away.

Bibb says the Weinsteins have found a successful business model for indie movies at a time when action-adventure 3D spend-fests seem to be taking over the business. Not that there’s anything wrong 3D action-adventure. One of the Weinstein’s recent releases: “Piranha” in 3D.