STACEY VANEK SMITH: We’re heading into New Year’s weekend. Time to load up on champagne — or whatever your drink of choice might be. Sales of Craft beer were up this year — about 10 percent. But really, drinking beer is so last year. Bathing in beer — that’s where it’s at.

Caitlan Carroll reports on a spa in Germany that’s putting new kinds of suds into their baths.

Caitlan Carroll: Susanne Taschner-Schmidt greets me at the door of a small hotel and spa. We are in the town of Neuzelle. Population: 20,000. About an hour east of Berlin. Home to the original beer bath.

Susanne Taschner-Schmidt: A beer bath is quite a good wellness act. The bath has a calming action. It’s good for your soul and your skin.

Schmidt helped develop the recipe. It includes black beer, secret herbs and yeast. You can buy a bottle of the beer bath from the local brewery for about $5 and try it at home, or experience the full $60 treatment, like me.

We walk past the front room filled with antlers and country kitsch and head downstairs to the baths. It doesn’t look like a conventional spa — the tubs are in sort of cave-like room lit only by candles.

Taschner-Schmidt: Yeah. Here you can take your clothes off.

Schmidt turns on the tap and hot water flows out. She turns on another tap and dark beer runs into the tub. The bubbles start rising and I get in.

It’s kind of a bizarre experience. Schmidt pours herbs and yeast in the water. It feels a little soupy and kind of makes my skin itch.

But beer baths like this have helped the build the economy of this tiny town. Germany has more than 1,200 breweries and 5,000 brands of beer. It’s tough to stand out from the pack. The local Neuzelle brewery, which partners with the spa, now does a brisk business selling bottles of the beer bath as well as other healthy brews — like anti-aging and marathon beer.

Schmidt says there are even copycat beer baths opening throughout Europe.

Taschner-Schmidt: But it’s not like our beer bath. In some baths, they give a bottle of beer in the bath and that’s all.

This beer bath is getting more popular. Between the brewery and the spa, more than 100,000 people visited Neuzelle this year.

VANEK SMITH: You can check out photos from Caitlan’s trip to the beer bath. Here are links to the spa hotel and to the Neuzelle Brewery, in case you feel like ordering some beer bath to try at home. 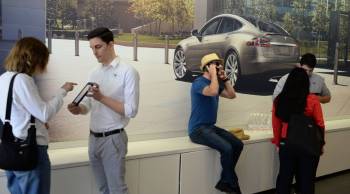 Will work for Tesla