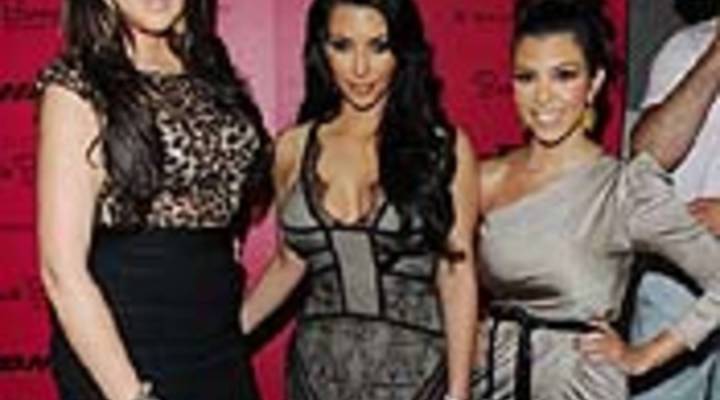 Keep the Karadashians in your pocket

Keep the Karadashians in your pocket

Kai Ryssdal: The Kardashian sisters — Kim, Khloe and Kourtney — are part of that growing part of celebrity America that’s famous mostly for being famous. They’ve built a sisterly empire of reality TV shows, fashion lines, perfumes, cosmetics, even their own diet pills.

Next week, they’re going to add will add financial services to the mix. A prepaid MasterCard debit card with their likenesses on the plastic. Of course, having a Kardashian card doesn’t mean you can spend like a Kardashian. But Marketplace’s Stacey Vanek Smith reports, the sisters are joining a celebrity trend.

Stacey Vanek Smith: It wasn’t your typical financial product launch. Here’s how the Kardashian sisters pitched their new plastic on their blogs: “WOOOOHOOOO how cool is this?! Kourt, Kim and I have teamed up with Mobile Resource Card to launch our very own customized Kardashian Prepaid MasterCard!!!!”

A couple of weeks ago rapper Lil Wayne unveiled plans for a similar card. Ron Shevlin is a banking products analyst with the Aite Group. He says young consumers are great market for these cards.

Ron Shevlin: They are not great candidates for credit cards, and they are not particularly fond of writing checks. So they much prefer to use debit cards.

Which they can load and reload with cash. Card issuers like them, too. Prepaid cards aren’t subject to some of the strict credit card regulations that limit fees. And the cards are being used more and more like an alternative to bank accounts and credit cards.

David Robertson: These prepaid accounts are starting to look like more traditional checking accounts. And that’s certainly where the entire prepaid card industry is headed.

The prepaid debit card industry is worth more than $120 billion. Nearly 12 million people are expected to have one by 2014. Analyst Ron Shevlin says prepaid debit cards don’t bring in the big bucks credit cards did, but they do generate fees and get the kind of buzz your run-of-the-mill Platinum card just won’t.

Ron Shevlin: I actually did a Google search on “Kardashian debit card” and it already has 3.8 million hits on Google.

Now that is priceless.