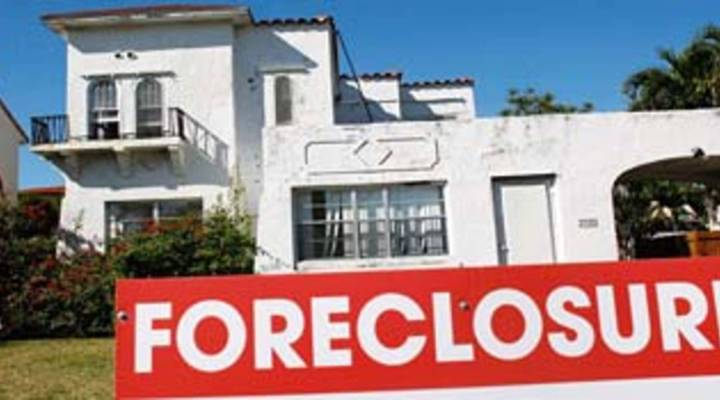 COPY
A foreclosure sign in front of a home in Miami Beach, Fla. Joe Raedle/Getty Images

Kai Ryssdal:There’s some kind of sad irony to be had in this next story. Or maybe it’s more a case of whether we’ll ever learn from our mistakes. The number of foreclosed homes has been growing, as you know. Not far behind, though, are professional investors, buying those homes and flipping them. That’s been making it tough for communities to do their own housing initiatives to make things right again.

So now HUD, the Department of Housing and Urban Development, is launching a new program. It’ll guarantee local governments and nonprofits a better chance at buying distressed properties. Bank of America and Wells Fargo — no strangers to foreclosures themselves — have signed off on the deal as well.

Sarah Greenberg is with NeighborWorks America, a nonprofit housing group.

Sarah Greenberg: The foreclosure crisis has created a lot of vacant properties that are piling up in communities, dragging down property values and having a negative impact on the surrounding neighborhood.

The federal government has pledged about $7 billion to the effort. More than 100,000 homes could be sold in some of the country’s hardest hit areas. Many of those areas have become playgrounds for speculators. The National Association for Realtors found investors accounted for about a fifth of all home sales in July. But Greenberg says private investment won’t be enough to turn these neighborhoods around.

Greenberg: Many times an investor is looking for a quick investment opportunity. So they may purchase the property and do some very minimal improvements, but they won’t necessarily bring it up to code or to the standard of the neighborhood.

Adam Wiener: It becomes a much more consistent, stable and predictable model for home prices.

So what’s in it for the banks, who may be selling to a lower bidder? UCLA real estate professor Stuart Gabriel says, they’re getting something out of it, too.

Stuart Gabriel: Often times, sales fall out of contracts. And in this particular case, you would have contracts constructed at likely very near market prices by reliable borrowers.

Gabriel says it’s likely many banks also own houses in the area and they’re happy to see prices stabilize.