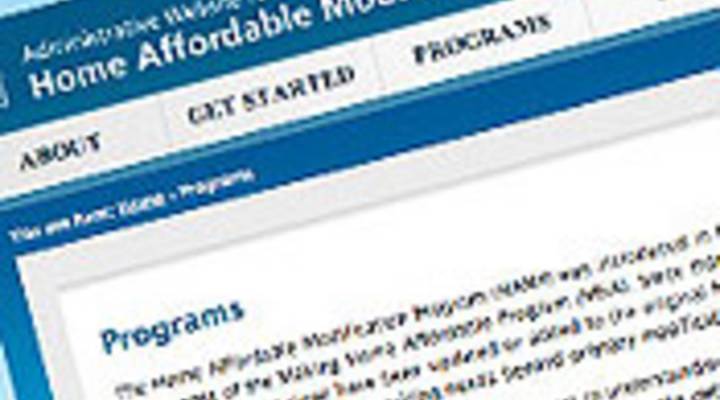 The problems with home mod. program

The problems with home mod. program

Kai Ryssdal: However they do it, the analysts who try to guess how many homes are going to sell in this economy each month — well, they blew it. A report on existing home sales for May fell way short of the mark when it came out this morning. Down instead of sharply up. Also higher in the longer-term trend is the number of Americans who are delinquent on their mortgages or actually in foreclosure. One of the government’s big ideas to fix that hasn’t worked out so well. The Treasury Department’s latest report says the Home Affordable Modification Program, or HAMP in the vernacular, has only helped 340,000 people get their loan payments reduced. And more than a third of borrowers enrolled have dropped out.

Stacey Vanek-Smith: Christine Schoenwald bought a home in Glendale, Calif. eight years ago. She started having trouble making mortgage payments after her salary got cut. So, last summer, she turned to HAMP. Her loan still hasn’t been modified.

Christine Schoenwald: We submitted the paperwork, two, three times and they lost it. They would tell me things like, “You were pre-qualified,” then “No, you weren’t qualified.” I spoke to dozens and dozens of people. I would get a different answer from every single person that I talked to.

Housing economist Christopher Thornberg says the banks aren’t equipped to handle this program. He says a colleague of his told him about a particularly frustrating short sale.

Bank of America declined to go on the record, but told Marketplace it was committed to mortgage modification.

Greg McBride: There are a lot of people who are in homes that they could never afford. And even with a reduced payment, they’re so far upside down they don’t have the desire to continue to make the payments.

So far, 440,000 have dropped out of the program. That’s 100,000 more than have gotten mortgage payments reduced. McBride says part of that high drop-out rate is due to unemployment — people lose their jobs and even a much lower payment is out of reach.