Calculating the value of carbon in trees

Calculating the value of carbon in trees

Bob Moon: The recent global climate summit left a lot of issues hanging at the end of last year. So the world is still trying to settle on a way to stop the steady destruction of the world’s forests. That’s a critical question, since the clearing of forests leads to more greenhouse gases worldwide than all the cars, trains and planes combined. But hold on. Some lawmakers think they have a solution. And it relies on financing from some of America’s biggest polluters.

Michael Montgomery brings us this story in collaboration with Mark Schapiro of the Center for Investigative Reporting.

Michael Montgomery: It’s a basic equation: forests pull carbon from the atmosphere. But when trees are burned or chopped down, that stored carbon goes back into the air.

Jeff Horowitz is with the nonprofit coalition, Avoided Deforestation Partners. He says one way to fight climate change is to change the economics of forests.

In Brazil’s vast Atlantic Forest, some big U.S. companies are already investing in this idea. Several years ago, the U.S. Nature Conservancy brokered a deal between American Electric Power, Chevron and GM. The companies gave a Brazilian nonprofit money to create a 50,000-acre nature reserve. What’s unusual about the deal is what the U.S. companies get out of it — credit for carbon stored in the trees to cancel out their industrial emissions back home.

But companies like AEP have to know how much carbon the trees are storing to qualify for credits. Deep inside the reserve, biologist Ricardo da Britez is helping them do just that.

Da Britez drives a small nail into a Guaricica tree. He wraps a metal measuring tape around its white trunk. Then, with some quick math, he calculates the tree is storing around 220 pounds of carbon. Maybe enough to cancel out a week’s worth of emissions from a Hummer.

Da Britez explains that credit for the carbon stored in this tree belongs to General Motors. If the amount of carbon doesn’t sound like much, supporters of the plan say this: If you multiply that one tree by millions of others, it could help America hold down its own greenhouse gas emissions.

That’s got some U.S. companies really interested. Here’s why. Legislation pending in Congress would put a cap on the heat-trapping gases companies can release. But the plan also allows companies to get around these caps by investing in projects that cut emissions somewhere else. And preserving a forest could be a lot cheaper as a first step than modernizing power plants.

Morris: What I’m trying to do is make sure that the cost of electricity to my customers stays as low as we can have it stay during the period of the technology rolling out.

Electricity prices may stay cheaper, but Greenpeace forest expert Rolf Skar isn’t so sure that letting companies buy up carbon stored in trees is the best way to cut greenhouse gas emissions. He says saving forests this way could amount to sidestepping needed regulations.

ROLF Skar: There’s no way to ensure that we will avoid the worst effects of climate change — catastrophic climate change — if we allow polluting companies to continue to pollute here in the U.S. and simply side step their obligations to clean up their act by paying for avoided deforestation elsewhere.

Skar says this way some companies will never invest in cleaner technology. And there are other issues: Can anyone really guarantee that these trees will store carbon forever. What if there’s a fire, or a blight?

Back at the reserve, Ricardo Da Britez finishes his analysis of the Guaricica tree. So how much is the carbon in this tree really worth?

But that tree, and the thousands more here, could become a lot more valuable if U.S. legislation passes. Then, the price of carbon could skyrocket. And that means U.S. corporations would set their sites on buying up forests like this one around the world.

MOON: Our story was produced in collaboration with the PBS newsmagazine Frontline/WORLD. Tomorrow we’ll look at how the project is affecting local populations in Brazil’s Atlantic forest. 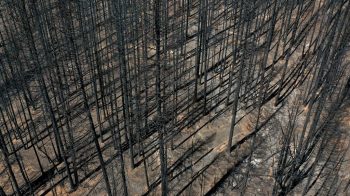