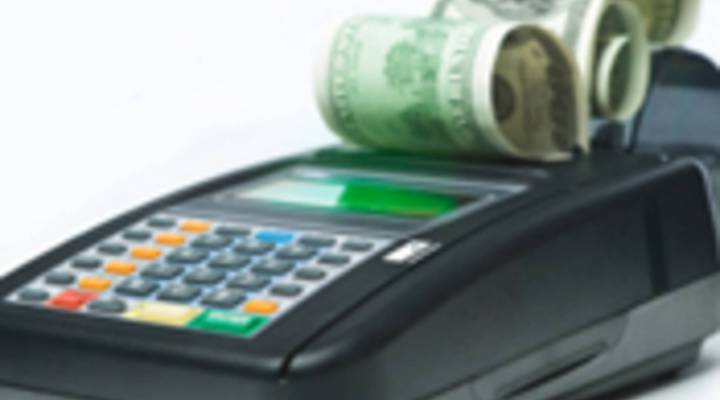 How card companies continue to profit

How card companies continue to profit

Tess Vigeland: And Stacey is here in the studio with me, and I wanted to ask a couple of follow-up questions. I know you’ve been following the credit card industry for at least the last couple of years now. How effective is this new legislation going to be?

Stacey Vanek-Smith: There are a lot of loopholes, but they’re still going to have a pretty big impact. Estimates say that they’re going to cost credit card companies anywhere from $20 to $50 billion.

Vigeland: That’s a pretty big chunk of change. I assume, this being a business, that they’re going to find ways to make up for that money.

Vanek-Smith: Couple ways, yeah. The first big one is something we’ve already been seeing and that is interest rates. They have already started hiking up our interest rates. In fact, the Pew Charitable Trust found that card companies raised interest rates 20 percent in the first half of 2009. Card companies make most of their money from interest rates, about two-thirds of it, so they are doing everything they can to hold on to that revenue stream.

The other big money maker is fees.

Vanek-Smith: And more fees. Basically, the card companies are taking a page from the airline industry book of nickel and diming.

Vigeland: Charging you for blankets. Is that what the credit card companies are doing?

Vigeland: And there’s nothing in the law that prohibits all these new fees.

Vanek-Smith: There are some fee laws, but they are very relaxed and they just say that they can’t add up to more than 25 percent of a card’s credit limit but that’s a lot. And so really, the laws on fees are very relaxed.

Vigeland: Are all those really going to make up for this $20-$50 billion loss of revenue?

Vanek-Smith: No, especially since it’s not just regulation that card companies are dealing with. They’re dealing with a new economy too. We are charging less, we have fewer cards and the best customers — the credit card’s best customers, or people who used to be their best customers — have no money and they are trying to figure out how to make money from customers that they used to ignore.

Vigeland: Those would be what were formerly known as “deadbeats,” the people who actually pay off their balance every month.

Vanek-Smith: Yes. They have to figure out how to make money off of the deadbeats. They’re doing a couple of things: the first is something called “interchange fees.” Now that’s a fee that a merchant will pay the card company every time you use your card.

Vigeland: So I go to Target, I use my credit card, Target is paying money to Visa-Mastercard to allow me to do that.

Vigeland: And presumably, we all eventually pay that, because that means merchants are just going to raise their prices to cover those fees, right?

Vanek-Smith: Absolutely. And then card companies, in order to make you use your card more, to collect more interchange fees, have another tactic to make money in the new economy and that is rewards cards.

Vigeland: Right. So does that mean we’re going to see changes in rewards cards or just more of them?

Vanek-Smith: A lot more of them, really. A lot of cash back cards, a lot of cards that are tied in with merchants; so they’ll give you access to special sales. A lot of cards tied into free gifts, things like vacations, airline tickets, hotel stays and things like that. Those cards are also attractive to the companies, because they charge you a fee for the card every year.

Vigeland: Right. In fact, I got a debit card recently that was a rewards card and turns out I have to pay 50 bucks a year for it.

Vanek-Smith: Yeah, they’re going to try cashing in on debit cards too, because more and more Americans are using their debit cards. So a lot debit rewards cards or debit-credit hybrid cards too.

Vigeland: Well, I suppose, as we’ve heard, this is a start, but obviously lots and lots of ways for the credit card companies to ding us as consumers. But, that’s the price we pay for the privilege of credit I suppose.

Vanek-Smith: Indeed it is, with interest!

Vigeland: With interest. Stacey, thanks so much for your reporting.