If you’ve ever picked up a bottle of Red Bicyclette Pinot Noir, there are some things you should know. First of all, it likely wasn’t Pinot Noir at all. Secondly, you’ve been had by the French. Third, you partially can blame a movie.

12 French wine producers from the Langedoc region have been found guilty of pulling the old switcheroo. They labeled their local generic red wine as coveted Pinot Noir and shipped it off to the US. Gallo bought millions of bottles and sold it as
Red Bicyclette Pinot Noir. From the Marketplace Morning Report:

Stephen Beard: U.S. winery E&J Gallo fell victim to one of the biggest frauds in wine history. They thought they were buying Pinot Noir for their Red Bicyclette brand. In fact, it was an inferior and much cheaper blend of grapes.

A dozen French wine producers and traders received suspended jail sentences and hefty fines for the fraud. French customs officers with a nose for wine detected the scam.

That, and someone finally noticed that the volume sold as pinot noir from the Langedoc region exceeded the Pinot Noir output of the Langedoc region. Here in the States, the wine “experts” at Gallo didn’t catch it. Neither did people reviewing the wine:

Well well…ruby red and what a beauty! Full body, 13% alch…black cherry, yes with hints of plum. Cinnamon on the back pallate…not a bad pinot for the price..but there is a definite “oakiness” in the after taste??

Yes, there is, because you aren’t drinking Pinot Noir.

Finally, let’s not forget the movie Sideways. One line in that film — I’m not drinking any bleeping Merlot!! — sent the price of Merlot plunging and jacked up the price of Pinot, for no good reason. Those French wine producers were probably thinking — we’ll sell them their precious Pinot and it won’t be Pinot at all! Stupid Americans, they won’t notice the difference…. 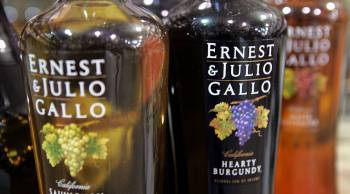