Kai Ryssdal: Democratic leaders in Congress are going back and forth with the president about the fate of the health care bill. They are trying to figure out what to do after Tuesday’s election in Massachusetts. In the meanwhile, though, the basic conundrum remains: Health care is not getting any cheaper. And that’s why this next story is so interesting.

Because when consumers think about prices, the logic is usually that cheaper is better. But that’s a problem in health care — because so many of the true costs are hidden from the consumer — it that cheaper may actually be worse. From the Marketplace Health Desk at WHYY in Philadelphia, Gregory Warner explains.

GREGORY WARNER: The afternoon I stopped by the Hotel and Restaurant Employee Dental Center in downtown Los Angeles, dentist Roger Fieldman had just done one of his more dramatic before and afters.

ROGER FIELDMAN: Oh, you should have seen what we just did!

FIELDMAN: This happens to be one of the most horrible looking partial dentures we’ve ever seen! And he’s been going like for years.

Fieldman’s patients are all union workers: Waitresses and bellmen, members of the Hotel and Restaurant Employees Union Local 11. Before they joined the union, most of them were lucky to have any dental care, much less at these prices.

The reason that the clinic can charge so little is that all its costs are covered by a union trust fund that the employers — the big hotel and restaurant chains — pay into.

The fund is managed by one man.

Rolly Throckmorton is 76 years old. He wears blue suspenders and sits at a desk engulfed by worksheets and tables. He says that the employer contributions to the fund have risen over the years with the costs of health care.

THROCKMORTON: Well in 1964, as I recall, the contribution rate was 15 cents an hour.

THROCKMORTON: $4.21 an hour. When you have, you know, a million-and-a-quarter hours a month, that does add up.

It adds up to over $50 million a year, which for some 7,000 union workers and their dependents, means all-inclusive medical benefits, plus dental, which brings us back to Roger Fieldman. There’s a downside to providing good care at cheap prices.

FIELDMAN: We have a high no-show rate. Because essentially their dentistry is almost free.

The clinic’s no-show rate — that’s patients who miss appointments and didn’t call to cancel — is 20-25 percent. In his old private practice it was 5 percent.

FIELDMAN: We might have a two-hour appointment for some complex surgery, some dental implants, and then they just don’t show up! And for two hours of doctor and assistant time, what is the value of that? $1,000? More? The patient’s paying $6.

$6 being the fee for no-shows.

THROCKMORTON: When it’s only $6, there’s very little incentive, if it’s not convenient, for them to keep the appointment.

Throckmorton says if there’s one thing he’s learned after balancing the books and the union’s trust fund all these decades it’s this: That when money is not a factor, people do not think much about waste.

Take, for example, the emergency room.

THROCKMORTON: We have no emergency room charge.

Some members will use the emergency room at any sign of sickness.

THROCKMORTON: If there’s any doubt about it, they go.

Or just because it’s convenient. Because there’s no co-pay.

THROCKMORTON: Now they can’t evaluate them and tell ’em, you’ve just got a cold, you don’t belong in emergency care. The hospital is obligated by law to see them in the emergency room. The cost is a minimum of $700.

Which the fund, of course, pays for. Now, for years the union didn’t make a big deal about how much health care people used. They wanted to give their members the most access to care. Until the recession slammed the hospitality industry.

THROCKMORTON: It was just almost like driving off a cliff.

Union workers’ hours fell 20 percent. Employer contributions, of course, dropped. The fund was spending more than what was coming in.

TOM WALSH: We were deficit spending at the rate of over a million dollars a month. Bleeding.

Tom Walsh is the union president.

WALSH: So we did something that unions don’t usually do. We went to our members and said, look, here’s the problem.

The union couldn’t go back to the employers and ask for more money, not with the industry still in trouble. So union leaders voted to slap a co-pay on emergency room visits. It kicks in next month.

WALSH: We thought a $50 co-pay was something reasonable.

And effective. Throckmorton calculates that visits to the emergency room will drop in half. That alone will save the fund $500,000 a month.

WARNER: So, Rolly, let me ask you. Are you worried that people who are sick are not going to go to the doctor?

THROCKMORTON: There will be some of that.

Rolly was pretty blunt about this. He says if you’re going to cut costs, you’re going to risk that some people who should have gone to the emergency didn’t, because of the co-pay. How many people is a number that even Rolly Throckmorton can’t calculate. All he knows is how many visits the union can afford. 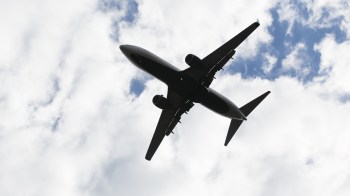 Airline catering staff are protesting around the country