Steve Chiotakis: Like most states, Pennsylvania has big budget problems. And the state is counting on gambling revenue to close the gap. If a law to allow table games such as poker and blackjack doesn’t pass this week, the governor says he’ll have to institute big layoffs. Joel Rose reports.

Joel Rose: For weeks, Governor Ed Rendell has been threatening to furlough nearly 1,000 state workers unless a gambling bill reaches his desk by Friday.

Ed Rendell: There comes a time when we have got to start saving money. You know and I’m sorry folks, I didn’t cause this crisis.

The Democratic Governor and Republican lawmakers managed to close a $3 billion budget gap last fall. But that deal depended on $250 million in tax revenues from table games, which are still illegal in Pennsylvania casinos. Without that money, Rendell says he’ll have to cut even more.

Rendell: It is painful for me. I’ve just agonized about firing anybody. So for me to lay off a 1,000 people this year, if there was any way possible I could avoid it, I would avoid it.

Lawmakers from both parties say they’re close to a deal that will prevent layoffs. But the ongoing drama reveals a state government that’s so polarized it can barely function, says Franklin and Marshall College political scientist Terry Madonna.

Terry Madonna: We are now in January in a new calendar year, and we still have not concluded last year’s budget. So this is the longest period of time in modern state history that the state has not completed its budget deliberations from the previous fiscal year.

Even if they do make this week’s deadline, Pennsylvania lawmakers won’t get much of a break. The governor is due to present the budget for the next fiscal year in about a month. 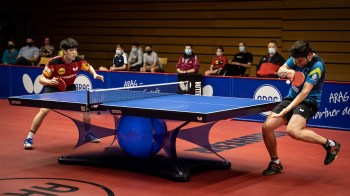 Ping pong, anyone? Sports fans find new games to bet on during the pandemic