Why we spend so much on pets

Why we spend so much on pets

Kai Ryssdal: Mind you this isn’t official, but the Obama girls are apparently very close to getting their new puppy. Most likely a Portuguese Water Dog. The President has said it would arrive in the spring. When it actually does get there, I hope he’s ready for a trip to the pet store. New puppies need a lot. Or at least we’ve come to think that they need a lot. And we fork over billions of dollars every year because of it. Michael Schaffer writes about the pet industry in his new book “One Nation Under Dog.” He himself became a first-time dog owner not too long ago, when he got Murphy.

Ryssdal: You didn’t even make it home, right? I mean you stopped at a pet store on the way home, and you’re out the door for $200 or something, right?

SCHAFFER: It all seemed really logical. He needed a bed, and we were going to crate train him, so he needed a cage. What struck me the very first time we saw him after the pet store was that he was completely filthy. He had dread locks, and he stank to high heaven. And we went up to the grooming area of the store and said, “Hey, he needs everything.” And they said, “Well, you should have made an appointment a couple of weeks ago.”

Ryssdal: Well, forget grooming. I mean 25 years ago the big choice when you had a dog was is it Alpo or Kal Kan, wet or dry, and then you were pretty much done.

SCHAFFER: Right. And that world has, a lot of what I write about in my book is about how the way we treat our pets is like this funhouse mirror reflection of the changes in our human society. So a generation ago most of us humans all shopped at Safeway or some store like it. And nowadays the food market has changed so some of us are shopping at Whole Foods, some of us are at Walmart, some of us are going off the grid and going to the organic farmer’s market. And pretty much the same thing has happened in pet food. Where there are still big, house-brand generics that lots of people buy, and at the top of the line there is this sort of never-ending competition to be more nutritious, more natural, more holistic, whatever that means, than the next person.

Ryssdal: And it’s tough to take this seriously. But by the same token, for a lot of people, it is a very serious thing, the relationship that they have with their pets and how much they are willing to invest.

SCHAFFER: Right, and a lot of people who have pets, you see this very intense relationship. One theory, which I subscribe to, is that the boom in pets, sorta of starting from the late 60s or 70s on, just as divorce increased, just as people started moving to further flung neighborhoods, away from tight-nit communities, just as all these kinda bowling-alone phenomena took hold, and people were less connected to one another. One thing some people did, to great benefit to themselves, was have their pets fill in some of the gaps.

Ryssdal: Obviously, this is a value judgment that each individual person has to make. But is this sustainable? This investment in our pets? I mean, it’s billions and billions of dollars a year.

SCHAFFER: According to the trade association for the pet industry, it was $17 billion in, I think, 1994, and it’s $45 billion in 2008. It didn’t take a hit in the 2001 recession. It seems to be resisting this recession pretty well, too. A lot of this spending of time and money and energy and emotion on pets has to do with this promotion that we’ve given them from man’s best friend to what the marketing people call a fur baby. And once you’ve gotten that promotion, I think it’s awfully hard to get a demotion just because of the economy. People who have a choice at least are going to scrimp and save on themselves before cutting off the dog’s supply of organic kibble or anything like that.

Ryssdal: “One Nation Under Dog,” is the name of Michael Schaffer’s new book. Michael, thanks a lot for your time.

SCHAFFER: Thank you so much for having me. 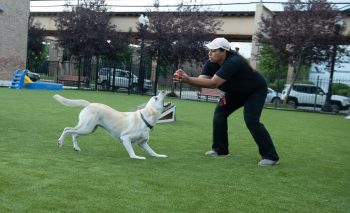