Executive bonuses have a plus side

Executive bonuses have a plus side

Steve Chiotakis: There really isn’t much more outrage that can be generated about the
bonuses paid at troubled insurer AIG. But this morning, there is blame being lobbed squarely at Treasury Secretary Tim Geithner. Alabama Senator Richard Shelby told CBS’s The Early Show that Geithner should’ve been making sure those bonuses didn’t go through. Shelby says the payouts came from money that wasn’t Uncle Sam’s to begin with.

Richard Shelby: This is American taxpayers’ money, a lot of people being laid off. I think people are not very sensitive toward where this money’s coming from — it’s coming from the hard-working American people.

For his part, President Obama says the payouts are an outrage, and he says he’s looking for ways to limit future money to AIG.

And the ripple effects continue. Now, New York’s Attorney General wants the names of those getting the bonuses.
He’s looking at legal options. Those bonuses, of course, have clearly touched a nerve, but limiting executive salaries may come with drawbacks that could sting more than just the bonuses. From North Carolina Public Radio, here’s Marketplace’s Janet Babin.

Janet Babin: Bonus pay is considered the only way to motivate mavericks to take financial risks and win.

Doug Elliott worked at JP Morgan for years. Now he’s at the Brookings Institution. He says if the government moves to limit executive pay at financial firms that took bailout money, those companies will lose their top performers at a time when we all need them to stay:

Doug Elliott: People in financial institutions work there for the money. So unless you can keep them from making more money anywhere else, which we can’t, you have to pay them.

AIG has said it has a contractual obligation to pay $165 million in employee bonuses. But investment adviser Gary Shilling says a bonus is supposed to reward performance, not be part of a contract:

Gary Shilling: The problem is that when these bonuses become legal obligations, then they no longer are bonuses, they simply are delayed salary payments.

Even so, Shilling says without bonuses, financial innovation will suffer. 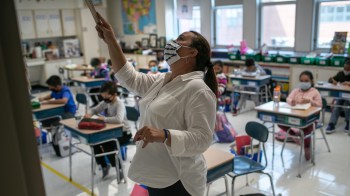