What U.S. can learn from Japan

What U.S. can learn from Japan

Kai Ryssdal: As Stephen Beard was just telling us, the financial world is getting ready for its global close-up next month. Heads of state will meet in London to figure out where to go from here. And somewhere in the backs of their minds will be this word: Japan. How Japan dealt with its financial crisis 15 or 20 years ago is the cautionary tale that policymakers are trying desperately to avoid a repeat of. To see how they’re doing at it we’ve called Adam Posen at the Petersen Institute for International Economics. Adam, good to have you with us.

ADAM POSEN: Thanks for having me.

Ryssdal: So I’m going to start with one of those economist’s on-the-one-hand, on-the-other-hand questions. You ready?

RYSSDAL: So, on the one hand, I’ve heard it said that we’re reacting to our banking problems faster than the Japanese did, but on the other hand, we’re being accused of propping up zombie banks, banks that aren’t doing so well, with that government money, which is it?

POSEN: It’s both. The Japanese took almost 10 years to get around to fixing their bank problems, which is a historic high for slowness. And so the fact that we’re faster than the Japanese were until they got it together isn’t really much praise. So in terms of history, if the Geithner administration of Treasury gets the banks fixed in the next year, it will still look pretty good by historical standards. But in the meantime, we’re seeing a lot of rumors in the market, a lot of instability and, like you said, zombie banks making the wrong kinds of loans.

Ryssdal: Are you buying actually that description of American banks as zombie banks that would be dead were it not for government money?

POSEN: The problem with zombie banks is that they don’t stay dead. If they just died, then we’d be OK. The problem with zombie banks is they go out there trying to eat the brains of perfectly good companies and depositors and keep the money for themselves. I don’t think that’s true of the vast bulk of American banks, but I have no doubt that that’s true for some of the least capitalized banks. And there are certainly a few of them out there, including some very famous ones.

Ryssdal: Yeah, so is it in your mind a question of when and not if we wind up, let’s not use the “N” word, but let’s say taking over some of these big banks?

POSEN: Aptly put, yes. If there is government takeover of a few of these under-capitalized banks that are behaving in fashions that waste taxpayer money, I think it’s both a good thing and it’s going to happen in the end anyway. There may not be that dreaded “N” word, nationalization. There probably will be some value left for the current shareholders of these banks. But in point of fact, you’re not going to get to the other end of this mess without some sort of government control. And the good side of that is without the taxpayers then getting any benefits from assets later being sold at a higher value.

Ryssdal: Let me get back to where we started, which is that confluence of what the Japanese did and what we’re doing. Have we learned the lessons of Japan of 15 years ago?

POSEN: I think we’ve learned two of the three lessons from Japan. Lesson one was you don’t raise taxes in the middle of a recession, you try to stimulate. Second lesson is you admit that you don’t want to leave banks in business when they’re under-capitalized for years at a time. And the Obama administration, the president himself, have said they’re not going to do that. So that’s two good lessons. But the third lesson, which is at some point you really do have to start shutting down in an orderly way some of the under-capitalized banks and maybe taking over some of them, that one we haven’t seemed to learn yet. It’s possible that the administration is just waiting for the end of the so-called stress test, but that remains to be seen.

Ryssdal: Well, if these stress tests, the examination of the banks that the government is doing to see, frankly, how they’re doing. If those stress-test results don’t back with good marks, I guess, and we do wind up taking over some of these banks, how hard will it be to eventually undo that nationalization, that is, to re-privatize these things?

POSEN: It’s a very legitimate question. And there are ways that you can make it easier. One of them is you start selling off good parts of these banks that were considered to big to fail just to begin with. So within Citi or Bank of America or any of other the big banks people are worried about, there are plenty of pieces that pretty quickly could be extricated and sold back to the private sector. I just want to reassure people that while this is complicated, it is doable.

Ryssdal: Adam Posen is the deputy director at the Petersen Institute for International Economics in Washington, D.C. Adam, thanks a lot.

POSEN: Thank you for having me. 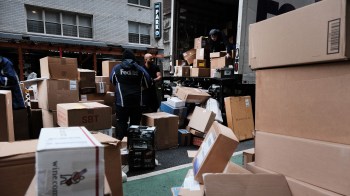