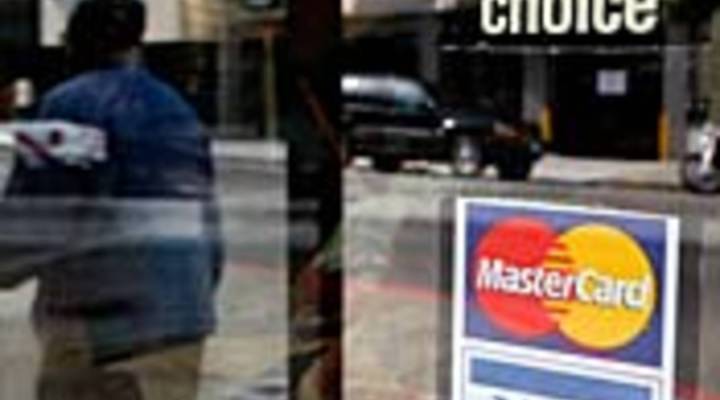 KAI RYSSDAL: We have collectively racked up a $900 billion credit-card bill in this country.

Given the way the economy’s going, it’s not at all clear who’s going to pay it. Millions of consumers don’t have the cash to settle their debts. There’s talk credit-card defaults might set off the next wave of the financial crisis. And that has left banks scrambling to reinvent the most profitable part of their business, and trying to convince people — the ones who still have good credit, anyway — that plastic can be their friend.

STACEY VANEK-SMITH: In midtown Manhattan, product manager Brad Weineke is buying a black-and-white cookie and a bottle of water with his credit card.

BRAD WEINEKE: My wife and I typically put pretty much everything but our rent on our credit card.

Weineke used to have a card that earned frequent-flier miles. Now he uses a cash-back card. So, every time he charges something, he gets a little bit of money back.

And these days savings is sexy. And virtuous credit cards like Brad’s are one way banks are re-pitching plastic now that debt is a four-letter word.

CREDIT CARD COMMERCIALS: “The Discover Motiva card. When you pay your bill on time, six months in a row, you get the next month’s interest back as a cash reward.” . . . “Your cash back appears each month on your statement — automatically.” . . . “So call now for the fee-free, Simply Cash business card.”

Did you get that? The more you charge the better off you are? There’s Visa’s new NestEggz Card and Fidelity Investments’ Retirement Rewards card. Both deposit 2 percent of what you spend into a retirement account. Charles Schwab’s Invest First Card funnels 2 percent into a Schwab brokerage account. Company spokesman Richard Musci says the cards have been a success.

RICHARD MUSCI: The take-up rate has been tremendous. The volume of inquiries and customer accounts has greatly exceeded our expectations.

Credit cards have offered cash rewards before, but these new cards are attached to savings plans. And consumers can earn back roughly twice as much as they used to.

Ken Wilbur is a marketing professor at USC. He says credit-card companies are shifting towards these virtuous cards to attract more upscale and financially stable customers.

KEN WILBUR: The card companies move up-market and compete harder for those previously less profitable customers who had better credit and were less likely to carry a balance.

In other words, the customers they used to ignore, in favor of people who were less responsible with their credit. Remember, card companies pulled in a fortune in interest charges and late fees from people who spent more than they could afford to pay back. And, before the economy crumbled, no one was too young or too risky to qualify for a card.

CREDIT CARD COMMERCIALS: “There’s no credit check. Everyone is eligiable to sign up. You don’t even need a bank account.” . . . “And a credit card for you! I love shopping! You never run out of money.”

And if you did run out of money, you could tap your home-equity line to pay your credit-card bills. That’s what many homeowners did for years. Then the housing market collapsed and those lines of credit dried up. That’s left credit-card companies scrambling to save their business model.

Robert Manning is the author of Credit Card Nation.

ROBERT MANNING: The credit card is the most profitable line right now in the banking industry, and they need to squeeze it for everything they can get.

So, Manning says, credit cards are cutting back on benefits like free rental-car insurance and purchase protection, and they’re charging fees for things that used to be free, like your rewards. They’re also punishing risky customers with smaller credit lines and higher interest rates.

To figure out just who is a risky customer, Manning says card companies are hiring data mining consultants to identify cardholders who live in low-income neighborhoods, or shop at deep-discount stores. The thinking is, you’re more likely to have more trouble paying your bills if you live in an area where foreclosures are rising or shop with people who are behind on their card payments.

MANNING: We’re talking about risk assessment that’s not based on your personal behavior, but now, you’ve gotta be blamed about the person in line in front or behind you, whether they’re paying their bills on time. This is absolutely extraordinary and outrageous.

And likely to continue. As more people default on their credit cards, and as credit-card companies do whatever they can to make sure plastic keeps paying off.