Even Dilbert gets the boot

Even Dilbert gets the boot

KAI RYSSDAL: Chances are you’ve spent some part of your life surrounded by three gray panels — about four feet wide, maybe five feet high. Easily recognizable as the standard-issue office cubicle. Bland as they are, though, in this economy cubicles are good enough.

And today we’re going to continue with Taking Stock, our series of occasional conversations with people who can give us the longer view of our economic situation.

SCOTT ADAMS: Thanks for having me.

RYSSDAL: As you think about this past year and the mess that we are in, what passes through your mind as you try to translate it into your comic strip?

ADAMS: Well, the great thing is that in this kind of environment, almost everybody you deal with is trying to screw you. And so that makes great comic fodder. So, everybody’s kind of a little bit dishonest. Maybe not criminally so. But can you really tell if your cellphone service is better than another cellphone service? Or can you tell if you invest in a hedge fund that they’re going to invest in anything versus just keeping the money and spending it on fancy clothes?

RYSSDAL: Do you really believe everybody’s trying to screw you out there?

ADAMS: Well, I like to think everybody is, ’cause then I’ll be ready, you know, just in case. But, you know, it’s good to be vigilant.

RYSSDAL: Do you think we should have been smarter about this whole thing and maybe had that attitude for the past, ah, I don’t know, 10 years?

ADAMS: Well, if you think about it, most of our problems were caused by some degree of gullibility. I mean, somebody was told, “You know, even though you don’t make enough money to pay off this mortgage, it’ll be all right.” Or, in world affairs, we certainly believed a lot of stuff. I don’t know, I won’t go into that. But at every level, there was somebody believin’ somethin’ that when you look at from a historical perspective you think to yourself, “How in the world did they ever believe that?”

RYSSDAL: There is the caveat emptor flip-side, though, right? That the buyer does have to be aware and a little bit cynical.

ADAMS: Yeah, but the balance of power has kind of changed because of the complexity of the world. You know, it used to be if you were buying a horse, maybe you could look at the teeth. You could probably tell if you were getting a good horse. But if somebody says, “I’d like you to invest in these municipal bonds, and they’re insured double-A,” but then you find out that maybe the insurance doesn’t mean anything, and maybe the credit rating is a little bit suspicious. And, you know, everything’s a little bit too complicated these days.

RYSSDAL: You’re a guy who seems to get by with a healthy dose of cynicism. But I wonder if your readers appreciate that in the strip.

ADAMS: I think what they appreciate is anytime they see their own situation. I’m kind of the unofficial voice of the disgruntled. So if anybody’s got a beef with anybody about anything, there’s a pretty good chance that, in the 20 years of Dilbert, I’ve touched on it at least once. So if you don’t like that guy in the next cubicle who keeps using his telephone to make calls on the speakerphone, I’ve done a couple comics about that. So you might want to leave those on his desk.

RYSSDAL: Now, you just went and fired Dilbert. How come you did that?

ADAMS: Well, it just seemed like it was time for him to lose his job and figure out what it was like to be unemployed for a while. I know a lot of people who are unemployed — a lot of people in the neighborhood, a lot of friends. And so I was hearing a lot of their stories while standing in the dog park and other places. And I just thought, “You know, Dilbert needs to experience this for a while.”

RYSSDAL: What’s it going to be like for him, though. I mean he’s, you know, pathetic, frankly, right? So how’s he going to fend for himself?

ADAMS: Well, I can’t give away too much. But it is true, when you take away his structure, that he doesn’t operate as well. So, he’s going to be trying to live on his investments. That may not work so well. And then he’s going to be looking for a job. So he’s going to go through the humiliation of applying for jobs.

RYSSDAL: Is there a way, you think, this economy gets better without a lot of pain?

PERSON: Well, I think we were living on borrowed money there for a while. And once we realize the borrowed money’s gone and nobody’s got credit to get anymore borrowed money, that we’re probably in a period of change that is as fundamental as the Industrial Revolution. I think that ride-sharing will become real, because people will find that they just need to just to save money. I think you’ll have more people living in every house. People work at home because they can’t commute. So you have a lot of things that . . . If you asked people right now, they’d say, “I don’t think I want those things.” But all of them could actually work out pretty well.

RYSSDAL: But there are still going to be offices, right? What do you think those are going to look like. I mean, this is kind of your field of study.

ADAMS: Oh, I think that cubicles are going to last forever. But, I’ve always thought that we’d end up moving toward a Hollywood movie studio kind of model where, for each project or each product you kind of gather the people you need just for that effort. And then at the end of it everybody’s a free-range chicken again. And, you know, the Internet allows you to do all that stuff, so . . .

RYSSDAL: Do you think we’re ready for that, though? I mean, just having come out of 60 or 70 years of reliable, big companies. Everybody has a job. Granted, we move around. But there’s some sort of stability there.

ADAMS: I don’t know if it’s a case of being ready for it as it is a case of people who don’t have options. So, if you can’t get a job for a big company, you’re gonna say, “Well, maybe I’ll use my skill and be a freelancer.” And a big company might not want to hire you and pay all your benefits. But they may have a project where they need you.

RYSSDAL: So, are we going to see Dilbert as a permanent freelancer?

ADAMS: I can’t reveal that, but it would certainly be sacrilegious for Dilbert not to return to his cubicle eventually.

RYSSDAL: Scott Adams. You know him best from his comic strip, “Dilbert.” Scott, thanks a lot.

ADAMS: Thanks for having me. 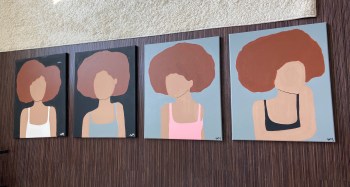 She turned a calming hobby into a business during quarantine