Renters struggle to keep up

Renters struggle to keep up

Tess Vigeland: Of the many concerns that arise when you lose your job, keeping a roof over your head is primary. We’ve talked a lot about what a struggle that’s been for homeowners, folks who can no longer make the mortgage. But more than 36 million people rent and that number is growing as homeowners go into foreclosure and become renters.

A housing payment is a housing payment, whether it’s a mortgage or a rent check, and renters face tough questions as they decide whether in this economy they can still afford the place they call home.

Lisa Hanock: It’s a catch-22 situation. You signed a lease and you can’t get out of it without paying a penalty.

Even if they found a sweet deal in another apartment building, it would cost them about $10,000 to move.

The Hanocks live on Wall Street. They got a deal when prices dropped after September 11. But a year ago, Hanock’s husband was downsized. Then, six months later, Lisa lost her job. He found work again, but at a much lower salary. And so their rent, which once seemed reasonable, is now stretching their previously comfy budget. And this problem is all over. Like in Texas.

Emma Flocke: Retail sales have been down, so my job at Target? Not so great.

Emma Flocke is a grad student in Dallas with two part-time jobs. She just lost one of her five shifts and doesn’t have any savings to dip into.

Flocke: I believe in my savings account right now I have $2. We just can’t put aside to save at this point.

Just covering basic bills can be a struggle for Flocke. Two months ago her electricity was shut off. She says coming up with a deposit for a new place is out of reach.

Flocke: $400 doesn’t seem like a lot in the big picture, but really that’s a lot for me right now.

So what can a renter who’s stuck in over their head do? To find out, I checked in with landlord tenant lawyer Anthony D’Anzica. He gave me the bad news first.

Anthony D’Anzica: Doesn’t matter if you’re in California, if you’re in New York or Texas or anywhere else: a lease is a contract. You are obligated to the terms of that contract.

But there’s good news too: if you break a lease, your landlord is legally bound to try to find a new tenant.

D’Anzica: That doesn’t mean that the landlord has to take anybody he can get off the street and put them in that apartment tomorrow.

It means he has to do what’s reasonable.

D’Anzica: It could be putting an ad in the paper or online. He can’t just leave an apartment empty and keep the damages accruing.

And if your landlord finds someone, you’re off the hook — almost. You could still get sued for the cost of re-renting — for taking out that ad or hiring a realtor — so D’Anzica says before breaking your lease, try to negotiate with your landlord.

And he should know. Not only is D’Anzica a lawyer; he also manages properties. He says if you don’t have the money, the landlord will want you to go.

D’Anzica: It’s not in his interests to keep a tenant on the premises that can’t pay the rent.

All across the country, people are dipping into savings to help make ends meet. Back in Dallas, Emma Flocke says she’s lucky she has a roommate to help with the bills.

Flocke: How much would it be to break the lease?

Unluckily, he’s also her ex-boyfriend. Her friends and family can’t believe she’s willing to go to this extreme for affordable housing.

Flocke: And it’s like, wow, how do you do that? You must be the most patient person ever. No, not really. It’s just this is what life has necessitated.

In these tough economic times it’s in everybody’s interests to work together, no matter how messy the situation. 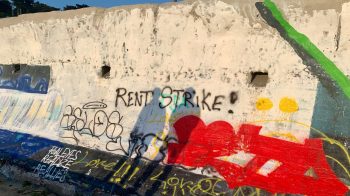