U.K. cracking down on immigration

U.K. cracking down on immigration

Steve Chiotakis: The financial crisis re-ignited a debate in Britain about the economic benefits of immigration in Britain. From London, Stephen Beard reports.

Stephen Beard: Another foreign worker arrives at London’s Heathrow. Five hundred a day have been coming to settle here. If that trend continues, the British population could jump over the next two decades by 15 percent to 70 million people.

But Immigration Minister Phil Woolas says he isn’t going to let that happen:

Phil Woolas: We’re introducing the biggest shake-up in immigration policy for 45 years, trying to reassure the country who are worried about these speculations about increased population that they don’t need to worry.

Britain has run one of the most liberal immigration policies in Europe. But now the government’s cracking down, making it tougher to get in. Woolas says that in hard economic times, with rising unemployment, high levels of immigration will only cause trouble.

He also argues that immigration leads to higher public spending on things like education and health care. And that extra cost outweighs the benefits of immigration to the economy. Overall, he says the national gain from large scale immigration is minimal:

Sir Green: In the U.K., the benefit to the host population is about 0.1 percent of GDP per year.

But many employers say immigrants are vital, bringing new skills and energy to the workforce, and doing jobs that Brits don’t want to do.

Muquim Ahmed owns a popular chain of Indian restaurants in the U.K. He says that even in a downturn, when jobs are scarce he couldn’t run his business without immigrants:

Muquim Ahmed: English-born staff here don’t want to do the dirty works of cleaning and cooking for someone and waiting on someone. So we have to bring in labors from abroad. We’ve got no other choice.

Nonetheless, the crackdown is popular with the public. According to one recent poll, more than 70 percent of Brits want a cut in immigration. 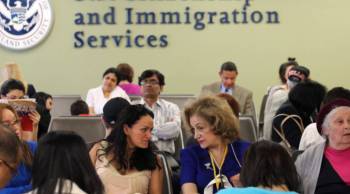