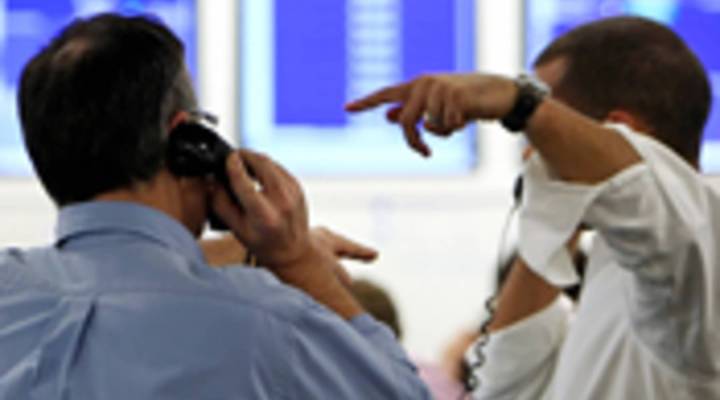 Stacey Vanek-Smith: I mentioned European markets were looking chipper today. Hopefully some of that optimism will bleed over to U.S. markets when they open later this morning.

Thought we’d check in, though, with our European correspondent Stephen Beard to get a better take on global markets. Stephen, the markets are looking bullish this Thursday. What’s the mood like across the pond?

Stephen Beard: Well, a measure of calm, but this is a very long way from euphoria. Investors, however, do appear to have been encouraged by yesterday’s coordinated rate cut — essentially it was the coordination rather than the size of the cut. There is a sense now that as leaders particularly gather for the G-7 summit in Washington tomorrow at the IMF meeting at the weekend that there could be more unified action to bring some confidence back to the banking system.

Vanek-Smith: Is there concern that this is sort of excessive government intervention?

Beard: Well I think at the moment everyone is grateful for government intervention, but it is recognized that there is going to be increasing involvement of the state. It’s essentially turning the government into the main intermediary in the financial system.

Vanek-Smith: So Stephen, we’ve been talking about the financial markets, but what kinds of signs are we seeing from the real economy?

Beard: Well they are fairly ominous, I’m afraid. I mean the reality is beginning to sink in here that all this turmoil has been transmitted to the real economy. I mean, we’ve had this IMF warning that the U.S. and Europe are on the cusp of a recession, and it does look as if a fairly substantial downturn is on its way.

Vanek-Smith: And there’s a report out this morning that safe sales are on the rise in the U.K., and we’re seeing that in the U.S. as well.

Beard: Yes, I mean this again is a worrying bit of evidence that all this very bad news hits ordinary people, people start worrying increasingly about their jobs, their mortgages, their pensions and their money, and whether it is indeed safe to leave it in the bank. This is the big fear, the extent to which all this financial market turmoil and catastrophic activity in financial markets may begin to seriously affect and undermine ordinary economic activity — the extent to which people stop spending. And we’ll know over the next few weeks and months the extent of the damage.

Vanek-Smith: Our European correspondent Stephen Beard in London. Stephen, thanks for talking with us.