Bob Moon: Apple’s iPhone has other cell phone makers running scared. Nokia is firing back, though. Today, the Finnish company announced plans to launch a new service aimed directly at Apple in Europe. And if it works there, it’ll probably be tried here.

Brett Neely joins us from Berlin. Good morning — and what’s Nokia up to?

Brett Neely: Well, Nokia’s launching a service called “Comes With Music.” You buy one of their phones and it comes with a subscription for a year’s worth of downloadable music. They’ve made deals with some, but not all, of the major labels so that users can download as much music as they want during that time.

Neely: Well, the catch is that after a year, you won’t be able to download any more music. The music you’ve downloaded won’t disappear, so you can still listen to that. But to get more music, you’ll have to buy a new phone. And those phones will run between $200 and $600.

Moon: Ouch. So, what’s in this for the music labels?

Neely: The labels are trying to come up with a new business because of illegally downloaded music. Presumably, the terms of the deal will be more attractive than the deals that they have with Apple, because this is also really aimed at Apple. And if it takes off, then the labels get a guaranteed cut from every phone sale. With about a billion phones sold a year, that could be a good market that could reinvent the music industry.

Moon: OK, if they’re aiming their arrow at Apple, should Apple be scared?

Neely: Well, yes and no. Especially in Europe, it was smart that they launched this in the UK, and presumably it will go to Europe soon, because you don’t see as much penetration by iPods as you do in the States, for example. I see a lot of people listening to music on their phones, and those are not iPhones because iPhones are expensive here and the plans are really expensive. You know, on the other hand, this whole idea of having to buy a new phone every year, that’s sort of rough, and especially because the target audience of this includes teenagers and I don’t think they are going to be able to shell $200 to $600 every year for music.

Moon: Reporter Brett Neely in Berlin. Thanks you very much.

Neely: Thanks a lot, Bob. 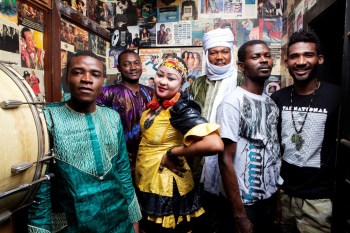