Stacey Vanek-Smith: Conventional wisdom has it that when economic times get tough, people leave the work force and go back to school. MBA programs saw record applications this year as young workers fled to the relative safety of business school. But with the economy the way it is, there may not be as many jobs awaiting those eager grads, as Joel Rose reports.

Joel Rose: I’m standing on the quiet, leafy campus of Saint Joseph’s University in Philadelphia, not far from the spot where Mike Yuengling got his MBA in May of 2007.

Mike Yuengling: I had a hopeful feeling because I knew that the MBA would open up some doors and change some of the avenues for me.

But those avenues aren’t opening up quite as quickly as he’d hoped. Like a lot of part-time MBA students, Yuengling had to stay at his current job for a year after graduation — in his case, as a physical therapist.

Yuengling: I have no complaints there. It’s just that I would like a better job. Wouldn’t everybody?

Yuengling is hoping to move into consulting. He started looking for work in March. And he says he’s not the only member of his class who’s having a tough time.

Yuengling: I have some friends that are looking. And from the sounds of things, they’re still beating the pavement as well.

Business school administrators have noticed, too.

Joseph DiAngelo: There’s a lot of hesitation out there in the employment community right about now.

Joseph DiAngelo is dean of the Haub School of Business at St. Joe’s:

DiAngelo: The investment banks in New York have gotten hit hard. So the schools who send a number of their students to New York have been hurt badly.

DiAngelo says the good news for St. Joe’s grads is that more of them tend to find work in industries that are still hiring — including food, insurance and pharmaceuticals.

Zelon Crawford: Students have to very creative in terms of finding their secondary area of interest.

Zelon Crawford runs the career counseling office across town at Temple University’s Fox School of Business. In a job market like this one, she says graduates may have to adjust their expectations of going straight to, say, a Big Five consulting firm.

Crawford: If consulting took a dip this year, do you need to get into a functional area like health care management, and then you can go into health care consulting? Or should you get into a business development or strategic planning role that will give you some the same skills that consulting firms are looking for?

Overall, Crawford says prospects for new MBAs aren’t as bad as they were during the recession of 2001 — at least, not yet. 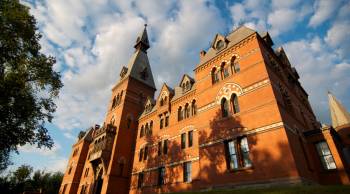