Nonprofit gets around subprimes

Nonprofit gets around subprimes

Bob Moon: What would you say if a member of the powerful Federal Reserve Board looked you in the eye and told you to jump?

In the case of a pair of successful online banking tycoons, they snapped to attention, quit their lucrative jobs and started a nonprofit.

Their mission: Encouraging home ownership without throwing people to the subprime mortgage sharks. As part of our continuing coverage of entrepreneurship in America, David Brancaccio brings us a story on a different kind of loan option.

Lupe Rodriguez: Did you wash your hands already? Sink is over here! Where’s your plate?

Lupe Rodriguez: And I work in the cafeteria. I serve and prepare breakfast and lunch for all the kids in school.

Lupe Rodriguez: Yes, I am.

Lupe Rodriguez looks more like maybe a licensed hair stylist and that turns out to be her second job.

Despite three jobs between them, getting the loan to buy their house was tough. Ten years ago, the Rodriguez’s filed for bankruptcy, and since then they’ve mostly steered clear of debt.

John Rodriguez: After that happened, we kind of stayed away from the credit, at all. We just like, “OK, we want nothing to do with this until we know that we can be financially set.” And throughout the years, we just kind of avoided it.

But avoiding debt has its downsides. You’re a lot less likely to go bankrupt, but you probably won’t have a decent credit score. People in this situation are called “thin file” borrowers. It could be they’re new immigrants, young or just anxious about credit. And they don’t have many options when it comes to applying for a loan.

John tried to go the subprime route. A broker offered him a $600,000 mortgage with low starter payments if he was willing to, get this, fake his income on the loan documents. John got himself out of there.

John Rodriguez: No. I knew my reality. I can’t afford that.

Instead, he set his sights on a more modest $400,000 home in his old neighborhood north of L.A., but he still needed help with the financing. So, he went to a nearby home ownership center called Cabrillo, where he had a real stroke of luck.

John Rodriguez: I went to Cabrillo and they told me what to do. And, it was about a total of 90 days of a rollercoaster ride.

The ride was courtesy of a pilot project by a company called Just Price Solutions. The scheme was dreamt up by a pair of online banking pioneers — Bob Fickas and Brian Cosgrove — to offer borrowers with shaky credit an alternative to subprime mortgages.

Fickas and Cosgrove teamed up with a small but very successful government agency called Neighborhood Housing Services of America. NHSA uses independent counselors to see who’s a good bet for a mortgage. Fickas says he liked that idea.

Bob Fickas: You would never let people drive a car without driver training, why let ’em have their first home without counseling?

And NHSA taps dozens of public, private and non-profit sources for money. But its service is low-tech and local, so getting a loan can take months or more. Just Price Solutions puts NHSA funding, counselors and lenders into the same online network. Now, the counselors have immediate access to every source of funding, from grants to complex mortgages. Fickas says now even someone with no credit score could get a loan right away.

Fickas: The government dollars mixed with philanthropic or corporate dollars can all work together in a more effective way. And it’s just, on paper its very simple. It’s just synergy.

John Rodriguez’s counselor checked the family’s incomes and savings, and helped them build a credit score. Rodriguez had to prove he paid their bills on time.

John Rodriguez: Everything that we make a monthly payment to. Said, “If you guys can get a letter from them giving us a payment history, we can use that as a credit.”

With this new credit, JPS pre-approved a 30-year fixed-rate mortgage. In less than three months, they were in their new home. Each daughter got a room to decorate.

Think Dodger blue with a three-foot team insignia in the middle.

John Rodriguez: She’s definitely wanted this for years and years, and renting, we couldn’t do this!

John and his family are delighted, of course, but not everyone likes the idea of pushing home ownership so widely. Dean Baker’s an economic at the Center for Economic and Policy Research. He says it’s time to recognize that it’s a bad idea for lower income families to stretch themselves financially.

John Rodriguez admits that his monthly payments are slightly higher than his rent used to be. But he says it’s worth every penny.

John Rodriguez: I think the pride that you get along with it and the things that you’re able to do, you know, with your own home, it pays for it.

His spell in bankruptcy years ago and the counseling with JPS have taught him the most important thing.

John Rodriguez: It’s an easy balance. As long as you keep all your finances straight. You know, so that you don’t put yourself in any jeopardy.

Moon: By the way, our longtime friend Mr. Brancaccio is host of Now on PBS, and his in-depth television report on this new approach to mortgage lending appears on many PBS stations tonight. 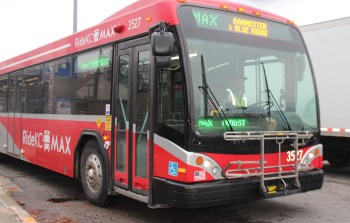 Should public buses be free?