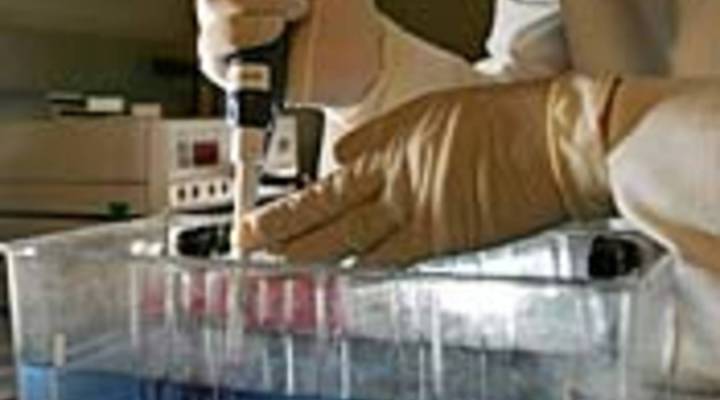 COPY
A lab technician loads DNA samples onto a gel while searching for variations in genetic samples that would point to someone's susceptibility to lung, prostate, breast and colo-rectal cancer at the UCSF Comprehensive Cancer Center in San Francisco. Justin Sullivan/Getty Images

A lab technician loads DNA samples onto a gel while searching for variations in genetic samples that would point to someone's susceptibility to lung, prostate, breast and colo-rectal cancer at the UCSF Comprehensive Cancer Center in San Francisco. Justin Sullivan/Getty Images
Listen Now

KAI RYSSDAL: The miracle of modern medicine means in some cases you can know more about your health than maybe you’d want to. You can take tests and find out whether you’re predisposed to certain kinds of cancer, or Alzheimer’s, or heart disease, then your doctor plans your treatment around those results, but some people have been reluctant to take the tests, out of fear that they could lose their health insurance, or their jobs. Tomorrow the Senate’s expected to take up a bill that’ll outlaw what’s come to be called “genetic discrimination.” It could also give a big boost to the businesses of genetic testing and personalized medicine.

STACEY VANEK-SMITH: Here’s one view of the future of DNA mapping from the movie “Gattaca.”

And DNA like that could cost you your job, or your health insurance in some states. Linda Avey is co-founder of 23andMe, a company that maps people’s DNA. She says a federal law could make a big difference in her industry.

LINDA AVEY:We do feel like this, at a federal level, is going to hopefully make people more comfortable with the idea of getting access to their DNA.

Edward Abrahams heads up the Personalized Medicine Coalition. He says research that could help patients with a genetic disposition for cancer, for instance, has been hamstrung. That’s because clinical trial patients who may already have the disease often drop out when they learn their genetic information can’t be protected.

EDWARD ABRAHAMS: There are, in my view, too few products on the market, and that is because we have had obstacles like fear of discrimination. 9

But that’s not the only thing limiting the growth of the DNA mapping market, says biotech venture capitalist Doug Fambrough. He says another big obstacle is that genetic research requires a lot time, and marketable discoveries are probably years away.

DOUG FAMBROUGH: Most of the work that’s really going to drive personalized medicine will emerge from the publicly funded genome centers, so I think it will emerge fairly slowly, actually, over the next decade or so.

The Genetic Information Nondiscimination Act, which has been in the works for more than a decade, is expected to pass into law quickly