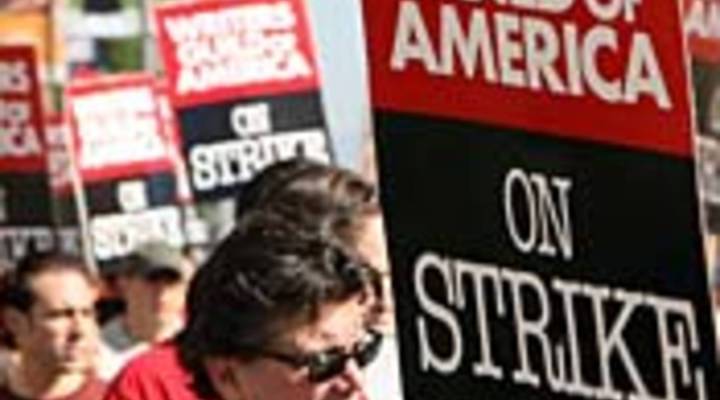 KAI RYSSDAL: This program’s brought to you by non-union labor. And the same might soon be true for CBS News productions. As the writer’s strike works its way into its second week…there’s talk today newswriters at CBS television and radio…as well as some of its local affiliates might walk out this week. They’ve been working without a contract. So far noboby’s talking. Negotiations are going nowhere. But there is plenty of chatter on the picket lines. Much of it about work. Stacey Vanek Smith reports walking around in a circle carrying a big sign might turn out to be a good career move.

STACEY VANEK-SMITH: At Fox Studios in Los Angeles, dozens of writers march near the entrance gate, carrying signs that say “Writers on Strike” and “Honk if you hate reruns.” Of course, this is Hollywood, and even the labor strikes here are glamorous.

PICKETER: We had Matt Groening here. Right there is Eric Roth and Steve Zellian, writers of “Forrest Gump,” and “American Gangster” and “Schindler’s List” walking together.

And that means it’s not a bad time to think about enhancing your career with a little strategic networking. Bonnie Mark was writing a pilot for Fox when the strike hit. She says, not working has been frustrating, but it hasn’t been all bad.

BONNIE MARK: It’s not very usual that you can spend time with other writers in this sort of environment and everybody’s sort of on the same playing field. So, you know I walked around this morning with Paul Haggis a couple of rounds.

He wrote “Crash” and “Casino Royale.” The strike has actually become a unique opportunity for writers. We may think of Hollywood networking the way it’s been shown to us by well, Hollywood writers.

NIP/TUCK CLIP: We should do a meal soon. You’ve got my digits right?

But Personal finance expert Liz Pullium Weston says networking isn’t just about getting your business card into powerful hands. She says, it’s more personal than that, and she says, this is a good opportunity for workers, in a very competitive field, to make professional connections.

LIZ PULLIUM WESTON: Often the best setting for network is not the workplace. It’s when you are volunteering, you’re at a conference. It’s walking a picketline, you know spending some time with people that you wouldn’t normally interact with.

A strong sense of camaraderie has developed among the writers, who can be a solitary bunch, says Elizabeth Kraft. She’s the co-creator of “Women’s Murder Club.”

ELIZABETH KRAFT: You sort of end up next to them on the line and you realize, oh I’ve heard your name and you walk for 20 minutes and chat and it’s a nice experience.

Still, there’s no end in sight for the strike. And as it drags on, the glamour will likely wear off. It’s estimated L.A. will hemorrhage about six thousand jobs a year as long as the strike goes on. Writer Rich Appel has worked on “The Simpsons,” “Family Guy” and “King of the Hill.” He says the strike has been a great way to meet and reconnect with people but, he points out, it may not pay off for awhile.

RICH APPEL: One of the sad truths of a strike, you know it kind of puts a bullet in networking, cause you go up to somebody and you realize, well they can’t give me a job, they don’t have a job themselves.

Of course, you don’t need a strike for that. Of the 12 thousand writers in the guild, about half of them are unemployed at any given time.