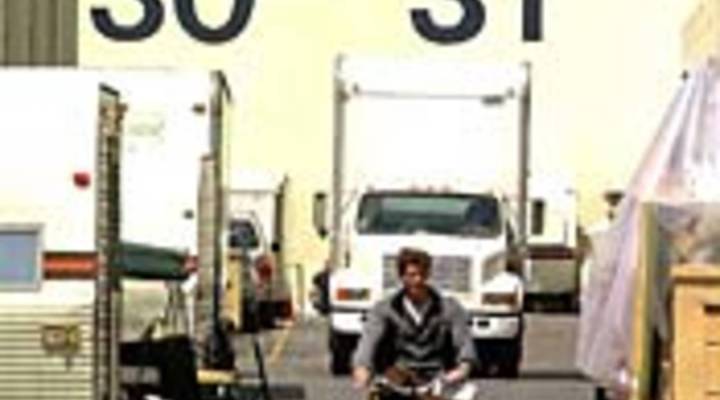 TESS VIGELAND: These days we can watch movies and TV shows on our computers, our cell phones, even our music devices like iPods. The folks who write those shows think they should be paid everytime someone downloads an episode of, say, “Grey’s Anatomy” or “CSI Miami”. Studios say writers shouldn’t be making money off the Internet until the studios themselves figure out how to make a profit there. Members of the Writers Guild of America, which represents a huge chunk of Hollywood’s scribes, have authorized a strike.
And if there’s no deal soon, the airwaves could be filled with more “Deal or No Deal.” Stacey Vanek Smith tunes us in.

STACEY VANEK-SMITH: It’s stockpiling season in Hollywood. Studios have been madly snapping up movie and television scripts. They’re trying to lock in deals before the Writer’s Guild contract expires at the end of the month.

Susanna Fogel: It sort of feels like cramming for final exams in college.

Susanna Fogel and her writing partner have been working 12-hour days to finish up project outlines and scripts. They’ve struggled for years to break into the business, and now they can finally support themselves with only their writing. For them, the strike comes at the worst possible time.

Fogel: I mean, it was just recently that we were working at clothing companies and olive oil stores and J Crew and all the odd jobs that we’ve had. Down the line, making X large sum of money versus Y large sum on residuals is going to be beneficial to us, but right now we just want to pay our rent and our car payments. So, it’s sort of . . . We’re taking this one for the team, but it’s not a comfortable decision.

Fogel might not be focused on the future, but the Writer’s Guild is. It’s demanding that writers get paid everytime someone downloads a movie or TV show, or orders a video on-demand. Studios say it’s too soon to know what a reasonable cut would be — they’re still losing money on the Web. At the moment, the Internet brings in less than $100 million in revenue. The entertainment industry is worth more than $40 billion.

But everybody knows the future is online. Nick Counter is president of the Alliance of Motion Picture and Television Producers.

But Guild President Patric Verronne says writers have gotten a raw deal in the past with emerging technology. He says guild members stand to lose a lot of money if they take a wait-and-see approach.

Patric Verronne: Well, we’ve waited-and-saw in home video. And for about 20 years had a terrible formula. And nobody’s come around to say, “Well, we’ll fix it.” So, we can’t get fooled again.

The guild estimates its members lost about $2 billion because it didn’t negotiate hard enough for a portion of DVD profits back in 2001. If the writers do strike, it will mean tough times in Tinsel Town. The guild walked out for five months back in 1988. The industry lost a billion dollars.

Not to mention the impact on viewers. Moviegoers probably wouldn’t notice a difference, because films often take more than a year to produce. But couch potatoes could be in for a long, lonely winter. There would be no new episodes of “The Simpsons,” “The Office,” or “Grey’s Anatomy.”

But Motion Picture Alliance’s Nick Counter says studios are prepared for the worst.

COUNTER: You have reruns, and we have programming that is basically strike-proof — reality programs, talk shows — the nonscripted areas of our business.

If the strike goes through, it could mean a lot less “Lost” and a lot more “American Idol.”