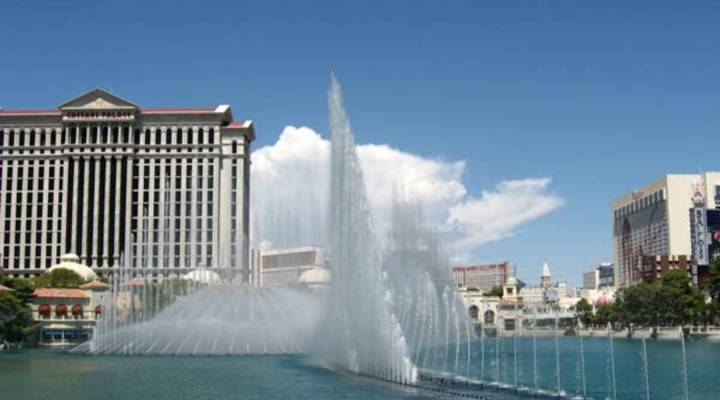 Battle heats up over Southwest water

COPY
The fountain at the Bellagio Hotel in Las Vegas. Stacey Vanek-Smith

Battle heats up over Southwest water

The fountain at the Bellagio Hotel in Las Vegas. Stacey Vanek-Smith
Listen Now

KAI RYSSDAL: It rained here in Los Angeles over the weekend. Poured, in fact. And it was great, because it was a long dry summer here and across the rest of the Southwest.

Climate experts say it’s only going to get worse — which has made one already-scarce commodity all the more precious. Stacey Vanek Smith reports on the competition for water between cities and the countryside.

STACEY VANEK SMITH: Agriculture uses about 80 percent of the water in the Southwest. Farmers and ranchers also pay less for their water than urbanites do, thanks to government subsidies. Now drought-stricken cities from Phoenix to Salt Lake City are looking to divert water from rural communities. John Harte is a professor of environmental science at Berkeley.

JOHN HARTE: The whole Southwest should be worried. We’re in for some big conflicts over what will be the wisest and best use of water. We also are likely to see pressure to reduce the water supply to farms in order to maintain water supplies to large cities.

One of those large cities is Las Vegas. It’s been in the grips of a severe drought for nearly a decade. Outside the Bellagio Casino, a 20-million-gallon fountain shoots water into the 105 degree air.

Doug Bennett is the conservation manager for the Southern Nevada Water Authority. He says the Bellagio’s fountain actually uses recycled water. He says the casinos, along with everyone else, have gotten very thrifty with water But conservation isn’t enough.

DOUG BENNETT: We absolutely have to conserve and use efficiently the resources we have. But even then, there’s going to be a need for additional resources.

Las Vegas wants to pipe in water in from the northeastern part of Nevada, about 300 miles away. The additional water would supply about half a million new homes. The pipeline would cost the city upwards of $5 billion, and still has to be approved by the state.

Bennett says Vegas needs the water to accommodate the more than 200 people who move there every day. But critics in northeastern Nevada say the Vegas pipeline would be disastrous. Susan Lynn is with the Great Basin Water Network.

SUSAN LYNN: What it could do is dry up a lot of springs, lower the water table in the ground so that plants cannot reach any water — so they die off… And when the plants die off, then we have the dust.

Dean Baker is seeing more and more dust these days. He’s farmed and ranched in northeastern Nevada for more than 50 years. Walking through a field on his ranch, he points to what looks like a sand dune.

DEAN BAKER: This used to be a pond that 25 years ago — you would have seen ducks flying off of it when we walked up here.

Baker says over-pumping is to blame for the pond’s disappearance. He says Las Vegas has been buying up local ranches, and their water rights, at above-market prices to get rid of opposition.

BAKER: Surely they know that if they take the water out, that it will lower the water table to the point where it changes and dries meadows and whatnot up… If they really aren’t going to hurt anything, why did they need to buy all the ranches?

The Water Authority’s Doug Bennett answered that question this way:

BENNETT: We’re looking at using water from within the state of Nevada that has not been appropriated to anyone else, and that the state engineer will say can be taken without impact.

Bennett says this water would be a sustainable resource. But Susan Lynn of the Great Basin Water Network disagrees, and says the city should look elsewhere for more water, and tighten its belt even more.

LYNN: What is more valuable — is it lawns and swimming pools and golf courses, or is it crops, or is it people’s lifestyles who choose the rural lifestyles? These are choices we’re going to have to be making and the choices are not easy.

Lynn says those tough choices will have to be made all over the Southwest.