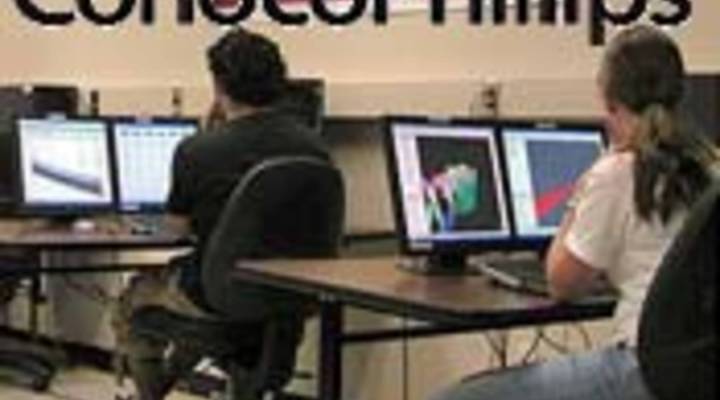 A new class in corporate sponsorship

A new class in corporate sponsorship

KAI RYSSDAL: Parents of college-age kids are probably digging deep in their wallets right about now, trying to foot those tuition bills. At the University of Iowa in-state undergrads will pay something near $18,000 this year.

School administrators everywhere, not just in Iowa, always say tuition alone doesn’t cover costs. So they have to raise money elsehwere. It’s a dilemma that can get fairly pointed at times. Earlier this year, Iowa considered renaming its College of Public Health after Wellmark Blue Cross Blue Shield in exchange for a $15 million donation from the Wellmark Foundation. Stacey Vanek Smith has today’s lesson in education economics.

Stacey Vanek Smith: Corporate cash is no rookie in the field of academia. Any college football fan could tell you that:

Announcer 2: AllState is proud to have brought back the Sugar Bowl…

And Boise State’s basketball team fires up fans at the Taco Bell Arena. So, is there really such a difference between naming a stadium after a company and naming a school of health after a corporation? University of Iowa economics professor George Neumann says yes. He points out that the faculty voted against the renaming. And he says the head of the College of Public Health was an outspoken critic of the deal.

George Neumann: I know the dean’s view was that the perception of independence of research, which is very important for a university, would be partially compromised.

The Wellmark deal has been tabled for now, but other public universities are dipping their toes into these corporate relationships. This fall, geology students at the University of Oklahoma will attend classes at the newly minted ConocoPhillips School of Geology and Geophysics.

Professor David Breneman teaches the economics of Education at the University of Virginia. He says if you want to know why this is happening, just follow the money.

David Breneman: The states have been cutting back the share of the support of the universities that they used to maintain. And so universities have been cast into a much more entrepreneurial position, where they’re having to compete for other sources of funding.

The University of Iowa used to get more than 60 percent of its operating budget from the state. That’s dropped to about 15 percent. Over the last decade, state contributions to college coffers have been falling at a rate of nearly 1 percent a year.

Randa Safady: It’s a very delicate situation for us.

The Texas Board of Regents recently decided to prohibit universities in that state from naming colleges and academic buildings after companies. But Safady says her schools still rely heavily on corporate money.

Safady: If some institutions are not willing to accept it, others are. And, you know, there’s an arms race for private money to fund not only our excellence opportunities, but now our core functions are funded with private money.

Last year, corporations gave more than $4.5 billion to institutions of higher learning. John Lippincott heads up the Council for Advancement and Support of Education. He says schools should accept corporate money, but they do need to be vigilant.

John Lippincott: Placing a name on an academic program or on a building is a form of branding and there is certainly no question that one of the most valuable assets that any college or university has is its brand.

But it’s not just their own reputations schools should worry about, says economics of education professor Breneman. He says, the academic world holds an honored place in this country a€¦ and that is just as valuable as cutting edge facilities.

Breneman: We should guard that privileged position we have in American society very jealously. We shouldn’t jeopardize it just for 30 shekels.

Iowa’s board of regents plans to meet next month. On the agenda: Possible changes to the guidelines colleges will have to follow when considering slapping a corporate name on a building or school.