KAI RYSSDAL: If you find yourself spending too much on the latest fashions, it might be time to grow yourself a dress. An Australian scientist explained how to do it today. The main ingredient is cellulose, skimmed off a vat of fermenting wine and smeared over an inflatable mannequin. Pop the mannequin and there you go. Inventor Gary Cass calls it wearable art.

For the last few years, though, Americans have been crafting their own wearable art, using a far more traditional method.

We sent Cash Peters to try his hand at an old-fashioned fashion craze made new again.

CASH PETERS: Wow, what could be more interesting on radio than knitting? Well, that’s what I thought: knitting’s dead and gone. Edith Eig.

EDITH EIG: Not any more. It might have been like that years ago, now it’s the most glamorous thing you can do.

Really? At the forefront of this new craze — especially among Hollywood stars — is Edith and her shop “La Knitterie Parisienne.” Pronounced like that, with no French accent. Which is fine, because Edith has more than enough accent for us all.

EDITH: It’s a thing that’s portable and all the actors in Hollywood do it on the set.

PETERS: Name me one.

PETERS: Give me somebody popular.

EDITH: Catherine Zeta-Jones is not popular enough for you?

No, not really! Jeepers.

It’s a fairly cheap hobby: You can buy a ball of yarn for about seven bucks, and it takes 14 balls to make a sweater. Six if you just make the arms. Oh, and you’ll need needles too. Luckily, Edith and her husband Merrill have just introduced a new kind of needle. It’s the talk of the knitting world.

PETERS: It lights up!

PETERS: You could even perform an eye operation with that.

MERRILL: In an emergency, yes you can. (LAUGHS)

PETERS: You should call it the Knitwit.

PETERS: Wouldn’t that be great?

EDITH: Hello, everybody, this is Cash.

Twice a week, up to 68 women and men gather in Edith’s store for a knitting circle. They chat, eat cake, drink . . .

PETERS: Yeah, let’s start with the wine. Hopefully, by the time I’m hammered, I’ll get the hang of this.

Mmm, because really, it seems very difficult. Knitting is the new Rubik’s Cube, it strikes me: it’s very tricky. But these people are hooked.

PETERS: So you’re nuts to begin with.

2nd WOMAN: So I’m nuts going into it.

MAN: It’s a zen thing for me. Takes me down after my day. I can sit and relax.

PETERS: You could just watch American Idol and eat chocolates. That’s really how my day ends.

MAN: Yeah, but you don’t get a fabulous knitted garment in the end that you can give to somebody who you love.

EDITH: Hold the needle with your right hand.

EDITH: Hold on to your yarn.

PETERS: I’m holding on to my yarn.

EDITH: Now go inside, hold on to this with this finger.

EDITH: Take the other piece of . . . go in-between like this.

PETERS: This is already too complicated.

EDITH: No it’s not. OK, you take this yarn and bring it over the X.

PETERS: This is already like quantum theory to me.

MERRILL: When you knit, you completely divorce yourself from the world around you, all your problems and your troubles just disappear.

strong>MERRILL: It is an addiction. The only addiction where you can use needles and it’s legal.

2ND WOMAN: I have knitting ADD. Which means I start a lot of projects, so my upstairs looks like . . .

PETERS: It looks like a herd of sheep exploded.

PETERS: So what have you knitted here, then? What is this? It looks like a birthday cake.

3RD WOMAN: It’s going to be a hat for a baby. These are ear-flaps.

PETERS: Now, how long has it taken you to make that?

EDITH: Put your finger up as if you were going to hitch-hike a ride. See, just like that, and bring it over the X, and just take it off.

PETERS: I thought I was gonna walk away with a hat tonight, but quite clearly I’m not.

PETERS: If I asked you to, could you knit me a banjo?

3RD WOMAN: I could make something that looks like a banjo.

Oh, great. And I’ll pay you with something that looks like money. But that’s the great thing about this group. Whether you’re trying to knit a hat or a sweater or something more ambitious — like an iPod — Edith’s on hand to help you make it work.

MERRILL: Edith will guide you through. If you follow her instructions, it will always fit.

PETERS: After hours, when everyone’s gone home, is she busy unraveling things, saying “Oh God, that was a disaster”?

MERRILL: No. She knows all there is to know.

PETERS: Are you a knitting circle for enthusiasts, or are you a support group for addicts?

EDITH: Oh my goodness, yes, there are some people who never miss a day. It’s getting bigger and bigger, we’re running out of chairs.

PETERS: Maybe you could just knit a few more.

EDITH: Yes, that would be . . . we’re making pillows right now, so that will be good for sitting on the floor.

PETERS: Put the needle in there, let it go with this, I did it!

If you’re expecting a hat from me for Christmas, it may be delayed, OK? 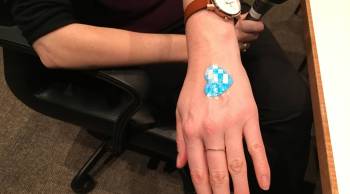