BRIAN WATT: Sony Pictures Entertainment has reached $3 billion in worldwide box office this year. That’s a marker hit by only two other studios in movie history. Warner Bros. reached the mark in 2004 and 2005 and Disney got there in 2003. Some Hollywood insiders claim there’s so much content being produced in the film world, it’s much too much to keep track of. But DVD subscription service Netflix would beg to differ. In fact they know their business for independent film distribution seems to be geared toward the proposition, the more the merrier. Rachel Dornhelm explains.

RACHEL DORNHELM: Hollywood veteran and indie film darling John Waters walked the red carpet at this year’s Toronto International Film Festival. Together with director Jeff Garlin, Waters was there for the premiere of his new stand up comedy film “This Filthy World.”

JOHN WATERS: It’s scary for me this time. Usually I’m the director. I’m going this time, it’s just me up there. I can’t blame anyone else.

JEFF GARLIN: I’m fully prepared to blame John for everything. That’s all I can say.

Turns out the company to blame — or laud — for the film is Netflix. That’s the online DVD subscription service that’s revolutionized the way people rent movies.

TED SARANDOS: My thought was, how could it be that these films would just happen at a festival and then disappear from the culture, and is there something that we could do, enabled by our ability to efficiently market films, to create a living archive of these films.

Sarandos started the company’s Red Envelope Entertainment division as an outlet for the kind of films that were good enough to get into Sundance, but not broadly marketable enough to get picked up.

Sarandos says often conventional distributors won’t touch something that’s expected to only sell 100,000 units. But that could be a decent run for Netflix because it has such low overhead.

SARANDOS: Because we don’t have the big machine infrastructure to wake up to produce the DVD, it’s fairly simple. You get the digital master for the film, we use an authoring house to create the DVD menus, and we use a replicator to replicate the DVDs for Netflix.

The company spends no money on DVD boxes or ads. It ships the films in thin envelopes and generates buzz with personalized viewing suggestions for subscribers.

Entertainment journalist Dade Hayes says even though Netflix isn’t risking a lot of capital with each DVD release, it could still be a slow road ahead for the on-line service.

DADE HAYES: It’s hard to imagine the same kind of heat around an independent film just going to DVD. There is no doubt plenty of money to be made, but it’s not going to generate the kind of excitement that something that is in a theater would.

Still it’s a model that can reap big profits for Netflix when they do snag a hit. And there can be non-monetary rewards for young directors. The two brothers behind one of Red Envelope Entertainment’s first DVD deals are doing their next movies with Fox Searchlight and Universal. 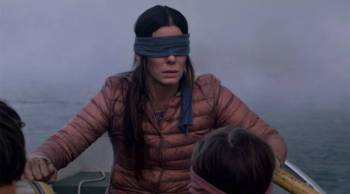