SCOTT JAGOW: The Federal Communications Commission has spent a lot of time going after indecency on TV and radio. I guess the FCC believes broadcast profanity and sex are corrupting young minds. Now, it seems to think TV advertisers are corrupting young bodies. As Lisa Napoli tells us, that puts SpongeBob Squarepants in the crosshairs.

LISA NAPOLI: If all SpongeBob ate or endorsed were pineapple, it might not be a problem.

But the FCC thinks the ads kids see wrapped around their favorite TV shows are partially to blame for the growing problem of obesity, so it’s pledging to study the link between the two.

Andrew Schwartzman of the Media Access Project thinks the FCC has another goal . . .

ANDREW SCHWARTZMAN:” . . . to pressure broadcasters and advertisers into doing something they would prefer not to have government regulation forcing.”

Some have called for a ban on marketing junk food to kids.

There’s a lot at stake here. The average child sees 40,000 TV ads each year. About $15 billion a year is spent to reach them. 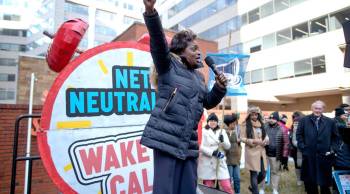