BRIAN WATT: iPod. The word itself has almost become a generic term for any digital music player. So what’s Microsoft’s answer? Zune. Not exactly the same ring to it yet, but the company hopes it will catch on. Yesterday, it put out some new details about the Zune. From the Innovations desk at North Carolina Public Radio, Janet Babin reports.

JANET BABIN: The thing that Zune can do that the iPod can’t is connect to other Zune players.

Users in the same wifi area can share full length sample tracks with each other. The device also sports a 3-inch screen for viewing videos — that’s an inch larger than a standard iPod screen.

Paul Resnikoff is editor of Digital Music News. He says it won’t be easy to steal away loyal iPod users. Last year they gave Apple 72 percent of the market for digital music players. But Microsoft isn’t about to back down.

PAUL RESNIKOFF: “They’re pushing it very hard. They really want to make a dent in iPod market share, so if you spend really a lot of money, usually something happens and I think that you’ll see some traction happening.”

Microsoft plans to get Zune on store shelves in time for the holiday shopping season.

It will also launch an online Zune music store similar to iTunes. 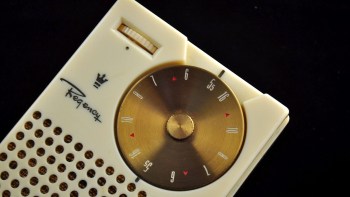 Taking the transistor mainstream with music on the go