KAI RYSSDAL: Mainstream movie audiences can go see “Pirates of the Carribean” or “Superman” all they want this summer. But car buffs out there can catch a film made just for them. It’s called “Who Killed the Electric Car?” About GM pulling the plug on its electric car, the EV-1. The title’s a little misleading, though. Los Angeles Times car critic Dan Neil visited a hangar at the Santa Monica Airport last night. And he reports the electric car is alive and well.

But we’re here to see the unveiling of a new electric car so, um, where’s the granola?

Except that, this isn’t your ordinary electric car. By that I mean slow, low range, a glorified golf cart, a hairshirt of eco-virtue for laptop liberals. This is the first offering of Tesla Motors, a Silicon Valley-based car company that is devoted to saving the planet, one scary blast of acceleration at a time.

MARTIN EBERHARD: If you were taking into account inflation, gasoline is the cheapest it’s ever been. Why do we need electric cars? Global warming came along, Middle East wars came along, Venezuela decided to hate us even more . . . Gasoline prices have gone way up and suddenly it made a lot more sense.

Eberhard’s strategy? Make an electric car that’s quick, sporty, rock-your-world cool. The Tesla Roadster is all that. It looks a little like a shrinking-ray version of the Porsche Carrera GT. But with a whopping 240-horsepower electric motor and a monster lithium-ion battery.

More fun facts: The roadster goes from 0-60 miles per hour in about four seconds — faster than a Porsche 911. And gets the electrical equivalent of about 135 miles per gallon. It works out to be about a penny a mile, with a range of between 200 and 250 miles. The soundtrack to this is a faint and florid whine, the sound of electrons doing their stuff.

Detroit, not known for its cat-like reflexes, probably isn’t sweating the Tesla. Electric-vehicle advocates think it should be. I ran into Chris Paine at the party. He’s the director of “Who Killed the Electric Car?”He thinks the Tesla is a bolt of lightning across Detroit’s bow.

CHRIS PAINE: Detroit is addicted, if you will, to the internal combustion engine. So, in this case, Silicon Valley has come in, said, “Hey, we don’t need the engine. We’re just gonna have a motor and batteries. OK, yes, the first ones are very expensive here, but this is the beginning of a revolution.

It’s a revolution that’s getting a lot of venture capital cash. Tesla has already raised $60 million. Investors include Elon Musk — he founded PayPal and has invested nearly $30 million of his own money in the company. Then there’s the Brothers Google: Larry Page and Sergey Brin. And some of the other Googillionaires have electric car fever too. Jorg Brown bought a car last night. He’s been jonesing for an electric car for about five years. And in that time he’s learned a lot about how Planet EV.

JORG BROWN: There are a lot of really flaky people in the EV business. Not to be negative about them, but it’s like good-hearted people who can’t quite put it all together. Until the day that I met Martin Eberhard, the founder of this company. He was the first person who was like . . . “You’ve actually got it all together. You actually stand a chance.”

With the revenue from the sports car program, Tesla wants to launch a four-door family car by about 2008, to be assembled in the US, with a price of around $40,000. 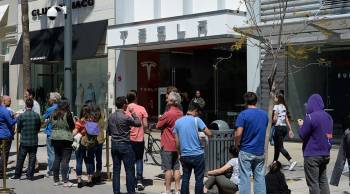