KAI RYSSDAL: When he said it, Timothy Leary was talking about LSD. But the slogan, “Better living through chemistry,” originally came from DuPont. Actually, the whole catch phrase was “Better Things for Better Living . . . Through Chemistry.” DuPont’s point was chemistry can improve our daily lives. Decades of toxic spills, pollution and Superfund sites might make you think twice about that. But the backlash has inspired something called green chemistry. And now it’s moving out of the laboratory and into the marketplace. Here’s Sarah Gardner from the Sustainability Desk.

SARAH GARDNER: If green chemists had their way, there’d be no need for massive toxic clean-ups or class-action consumer safety lawsuits, or company spokesmen forced to defend their most popular brands.

DUPONT SPOKESMAN: In fact, cookware coated with Teflon has been used safely by tens of millions of people for over 40 years and is safe when used properly and as directed.

That was DuPont recently, on the defensive over a long-lasting chemical used to make Teflon. That chemical may ultimately prove safe. But the point, say advocates of green chemistry, is to determine safety before products go to market, not after. Paul Anastas is one of the movement’s founders:

PAUL ANASTAS: Green chemistry is the design of new products and processes that reduce or eliminate the use and generation of hazardous substances.

Anastas and fellow scientist John Warner wrote what you might call the bible of green chemistry in 1998. The book challenged chemists to design with the environment in mind. In the past few years companies like Cargill, Archer Daniels Midland and Pfizer are taking a stab at it.

TV COMMERCIAL: I’m back. I’m back. We’re back. If you or your partner isn’t living life to the fullest because of erectile difficulties. . . .

Bet you didn’t know green chemistry is now behind Viagra. Pfizer figured out a new way to manufacture the little blue pill so there wasn’t as much toxic waste at the end of the process. That’s true for another Pfizer drug as well — the antidepressant Zoloft. Steve Brooks is head of Environment, Health and Safety for Pfizer Global Research and Development.

STEVE BROOKS: We reexamined how we made the product. We reduced our solvent usage by tenfold. We eliminated a particularly hazardous waste material by over 400 metric tons every year.

To witness one of the biggest corporate investments in green chemistry so far you have to visit Blair, Neb. Several years ago Cargill opened a plastics plant here under the brand name NatureWorks. The “green” in Cargill’s plastic is threefold: One — it’s made with a renewable resource, corn, as opposed to a non-renewable, petroleum. Two — the resulting plastic, called PLA or polylactic acid, is biodegradeable. Three — making PLA is cleaner than making conventional plastic. Carey Buckles is the plant’s site manager:

This plant is operating below capacity but Cargill recently scored a major coup when it sealed a deal with Wal-Mart. The retail giant is now packaging fresh-cut produce in containers made of NatureWorks’ corny plastic. NatureWorks CEO Dennis McGrew says rising oil prices and growing consumer awareness of global warming is helping to boost business:

Some environmentalists remain skeptical of green chemistry and say it’s more public relations than revolution. Most of the big companies involved, they argue, are still using traditional chemicals that pollute the environment and waste natural resources. But Joel Makower, founder of GreenBiz.com, says it’s not just greenwash.

JOEL MAKOWER: It’s clear that the combination of shareholder pressures around liability, regulatory pressures, global trade and concerns about climate and so many other things are really going to be pushing companies to do this. Whether they call it green chemistry or not, I think it’s just going to be called better chemistry.

MIKE MIILE: Hopefully they’ll have the same efficacy as the chemical ones without some of the negative side effects.

Advocate Paul Anastas insists that green chemistry and corporate success go hand in hand. Companies like AgraQuest, who’ve yet to turn a profit, hope investors will stick with them long enough so they can prove it. 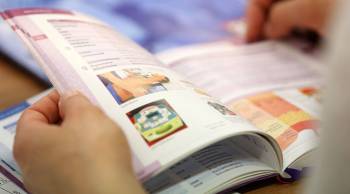 The risks of going back to school can have economic rewards