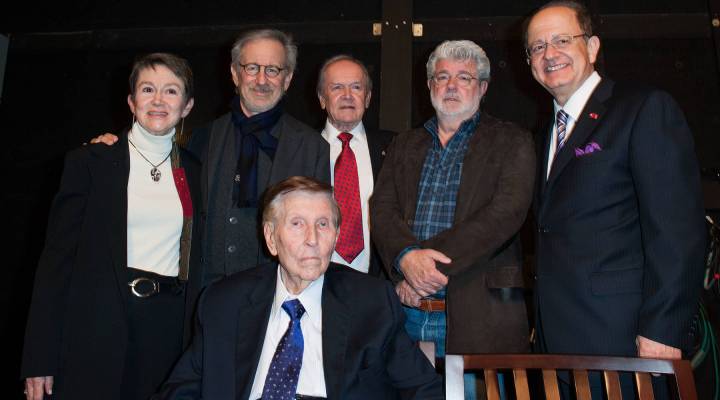 Sumner Redstone’s life as been about winning and hopefully being “No. 1” — and he’ll be the first to tell you that. In 1954, Redstone joined a movie-theater management company run by his father called National Amusements. In 1971, he was named CEO. From there, he acquired Viacom in 1987 and CBS in 2000. His empire grew to include such well-known companies as Paramount Pictures and Simon & Schuster. But in January 2006, Viacom announced it’d be spinning off CBS into its own company.

Marketplace host Kai Ryssdal talked to Sumner Redstone about the split, what drives him, his relationship with his children, and what he wants to do next. The following is an edited transcript of their conversation.

Sumner Redstone: My life has been about winning. I’m not saying I always have been No. 1, but I have been obsessively driven to be No 1. That’s true in the media business. It’s true when I practice law. It’s true when I was working or breaking Japanese codes — I always wanted to be No. 1.

Kai Ryssdal: How do you stay mentally engaged for the 60-something years you’ve been in business?

Redsone: I go to China continually. As a result, I made a deal very recently under which Nickelodeon’s broadcast to 125 million homes two hours a day. And that means Sponge Bob and the programs that fly here fly there. I’ve been recently to Guangzhou where we have the only branded channel in China which is MTV China. And recently I went to Kuwait and Dubai, where I had met with the royal family in Kuwait, and with the crown prince of Dubai, who’s a friend of mine. The way you stay mentally engaged is just stay mentally engaged.

Ryssdal: National Amusements, your holding company I guess for lack of a better term, is a family owned enterprise.

Redstone: Yes, it is.

Ryssdal: One of the things that happens when a family controls a business is that you have to figure out what happens when the founder, or the father, or the patriarch is no longer around. How do you figure that out?

Redstone: Well first I’m intending to be around forever, but naturally you have to build a structure, so that if you should buy any remote possibility pass away, there are others to take your place.

Ryssdal: Your son has filed a lawsuit against you.

Redstone: I don’t think that’s a subject I want to discuss now. We issued a statement about National’s view of the lawsuit, that it was a way to extract financial benefit in a family business and that the suit is without merit. As far as I’m concerned, the main thing is it’s a saddening experience.

Ryssdal: You worked for a while with your father.

Redstone: Yes, I did.

Ryssdal: You now work with your daughter.

Ryssdal: How do you separate business from family when you have to make decisions?

Redstone: Why do you have to do that? I think one can have a great family life and still be a great business person. Hopefully, I am. But I don’t see any conflict between family and business. Unfortunately, there sometimes is but there’s no reason that it has to be. I thought I got along well with my son, but I certainly get along well with my daughter. And in a way, it enhances my business experience to be part of a family that’s participating in my business. I had hoped that my whole family would someday participate in the business if they show their competence and their commitment.

Ryssdal: You were very seriously injured in a hotel fire in Boston in 1979. I read somewhere that you have said you really started living after that fire.

Redsone: I never said that, people like you say that.

Redstone: No, it’s not true. It was not a seminal event that changed my life in any way. If I was driven after, I was driven before. Nothing really changes my character and my personality, or my priorities as a result of that fire.

Ryssdal: What’s next for Sumner Redstone?

Redstone: Keep working. Keep playing the strategy to make sure our brands continue to be distributed all over the world. Keep working to see how we can drive the businesses successfully. The recent split that took place at Viacom was my idea. I had come to the conclusion that the world of the conglomerate was over, and my job was to adjust to a changing world. And I think I did. Largeness, they say, is no longer the name of the game. Today the name of the game is to be nimble, creative, innovative, focused, and I think that’s what we’ve created.

Ryssdal: Even a guy who spent his whole life trying to be No. 1 has to unwind somehow. How do you unwind?

Redstone: I go out to dinner, I play tennis with my wife. I swim.

Redstone: Let me tell you. I think that I may have the largest collection of saltwater fishing in the world. I went to Hawaii …

Ryssdal: Is it a vice, would you say? I’ll ask your wife, your wife is nodding.

Redstone: No, She’s very interested herself. We went to Hawaii recently. We went out in a boat where you could see what was underneath. They didn’t have a fraction of the fish in my living room. Watching the fish is almost mesmerizing. It tends to relieve stress, so that’s part of my life too.