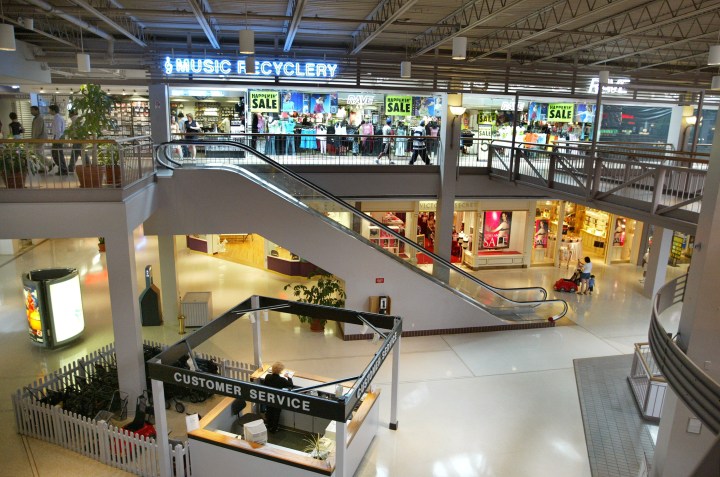 Retail sales fell 0.3% from April to May, according to data out Wednesday from the Census Bureau. Given the latest spending news, “Marketplace” host Kai Ryssdal checked in with Alana Ferko, manager of the Butte Plaza Mall in Montana, to see how business is doing these days. The following is an edited transcript of their conversation.

Kai Ryssdal: How are things?

Alana Ferko: Things are awesome and amazing. I mean, they’re a lot better than the last time we visited. And I just have to say, personally, thank you to all the good people who reached out. And my heart, it just overflowed with all their goodness and their good wishes.

Ryssdal: Well, I’m glad people reached out to you because that was a rough phone call you and I had. But things are better now. Tell me about it.

Ferko: So you’ve heard of a little production called “Yellowstone”?

Ryssdal: That’s a lot of dates, Alana, but yeah, go ahead.

Ferko: Well, it is, but people who know will understand. So the production of “1932” is going to happen here in Butte, Montana.

Ryssdal: Wow. And so do we expect to see Harrison Ford and Helen Mirren taking laps in the mall with you and your walkers, or what?

Ferko: You know what, I think we should build a special event around it. But the production company is leasing out our civic center, so some of the events that were scheduled at the civic center need to be rehomed. We are going to take on some of those events here. The call center, they are going to actually sublease their space to the production company for offices. But one of the exciting things we’re planning today is the November election needs to be rehomed. And we’re going to put them in the old department store.

Ryssdal: You know, it’s so funny. It occurs to me that you are — and look, we’ve been talking on and off for a number of years — but you are and you run a place that is incredibly civic-minded, whether it’s the walkers or rehoming the civic center events. It’s a community space almost, right? Not to get too carried away about it.

Ferko: It is. We are very civic-minded. But you know what, we belong to our community, you know.

Ryssdal: Look, I appreciate that. But let me ask you the fairly pointed business question, which is, the Butte Plaza Mall is a for-profit operation. You have to have tenants in there, you have to have consumers coming in and making money. And as you know, the economy is getting a little squeezed. There’s a lot of inflation. And I wonder what your concern is in the sort of short- to medium-term economic future as a woman who, you know, runs a place that depends on people coming in and shopping.

Ferko: You’re right, we still have to be real about it all. Inflation is kind of scary. It’s terrifying, I’m going to say. And I know that the [Federal Reserve] bumped up interest rates. That is going to affect credit card spending for a lot of people. Butte, Montana, though, we’re not a big credit card user. A lot of people pay cash. We’re stocked very well, so the supply chain has, in our world, has stabilized. Our stores and businesses have been doing very well. But you know, let’s be real: We take it day by day.

Ryssdal: Yeah. You know what’s funny is we’ve been talking for, I don’t know, five, six minutes, whatever. Neither one of us has said “pandemic” yet. Are you guys over that now, pretty much?

Ferko: No, no. We’re actually — to be fair — we’re in an uptick right now. But we are adapting for that as well. We would not dare to say we’re going to normalize this. But we are going to have to live with it because we have to maintain forward motion.