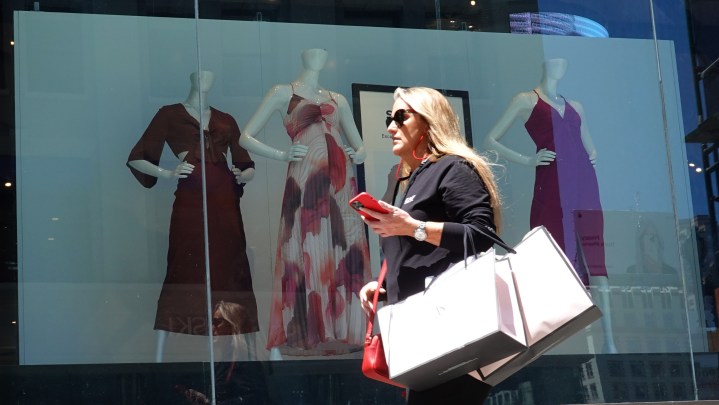 The whole point of raising interest rates, as the Federal Reserve did Wednesday, is to slow the economy and, therefore, bring prices down. With that in mind, let’s look at what’s happening to one of the economy’s main drivers: retail spending.

American consumers spent more than an estimated $697 billion on retail and food last month. When seasonally adjusted, that’s a slight decline from the month before. In normal times, that would be unpleasant news. And, frankly, it’s unpleasant in these times as well, but what we might have here is a classic silver lining.

So much can change in a year. For example, we spent $53 billion more at stores and restaurants this May than we did last May. But do you know where most of that $53 billion went?

For example, just from April to May, we spent 4% more at gas stations, but the price of gas went up 8%. Paying more, getting less. But it turns out the American consumer isn’t taking that lying down.

“They absolutely are moderating their behavior,” said Claire Tassin with Morning Consult.

We are cutting our spending a little on things we don’t need or big purchases we can delay. “Motor vehicle sales, electronics, home furnishings are where we are seeing consumers make those trade-offs,” she said.

And that — pulling back — may be exactly what the economy needs.

But, she said, that will take time to play out. Annual inflation in May was 8.6%, and that’s not gonna vaporize overnight. And so far we’ve been talking about goods, but there’s still a lot of pent-up demand for services. Inflation in that sector has been mostly getting worse in the past six months.

Correction (June 15, 2022): An earlier version of this story misstated the amount consumers spent on retail shopping and food in May and the adjustments made to the estimate. Consumers spent $697 billion before adjustments for seasonal variation.