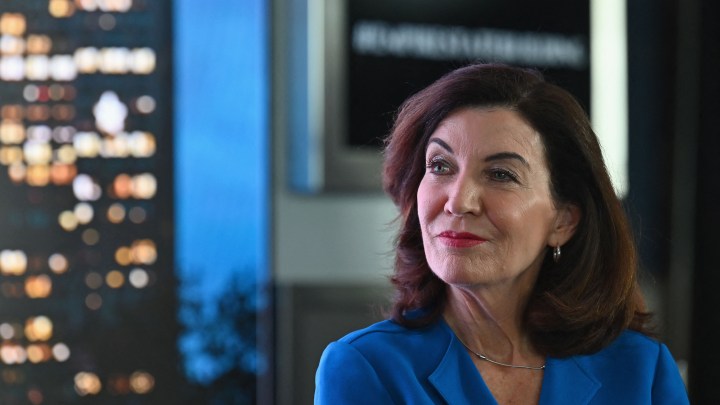 New York Governor Kathy Hochul, seen above at an April press conference, is expected to sign off on a salary range disclosure law that advocates say is a step toward pay equity. Angela Weiss/AFP via Getty Images

New York Governor Kathy Hochul, seen above at an April press conference, is expected to sign off on a salary range disclosure law that advocates say is a step toward pay equity. Angela Weiss/AFP via Getty Images

A bill that would require employers in the state of New York to list salary ranges for open positions now heads to Gov. Kathy Hochul’s desk, where it’s expected to get her stamp of approval.

It’s the latest bill as a growing number of states and localities enact pay transparency laws. Advocates say the benefits are universal but will particularly be felt by women and people of color.

Part of the reason is that such laws can reduce the impact of unconscious bias in hiring and setting pay, said Seher Khawaja, the senior attorney for economic empowerment at Legal Momentum, The Women’s Legal Defense and Education Fund. Khawaja advocated for the passage of the New York state bill.

“Requiring employers to disclose a pay range upfront forces them to contemplate a range based on objective factors, so budget skills and job responsibilities instead of relying solely on candidate-specific factors, which tend to incorporate these biases that devalue the work of women and other minority groups,” she said.

A similar law was passed by the New York City Council in January. However, in April, business interests successfully pushed back against the law, arguing that businesses needed more time to become compliant and that it could hinder companies’ diversity goals. The Council amended the law, which is now slated to go into effect in November.

Both of the New York laws follow the lead of states like California, Maryland, Connecticut and Nevada, among others, many of which require employers to disclose pay for a position if an applicant asks.

The statewide law in New York, however, would require job postings to list pay or a pay range — no ask necessary. The law will also require employers to post a job description if one exists in any new job ad, promotion or transfer opportunity. Companies found in violation of the law would be subject to fines. When signed into law, the rule may apply to remote positions that could be worked by New Yorkers.

There are caveats to the New York law, however. Employers with fewer than four employees are exempted, as are temporary staffing firms.

That caveat for small employers is a battle for another day, Khawaja said. She pointed to many businesses — nail salons, hair salons, restaurants and daycares — that may fall under that category and employ women of color.

“We agree wholeheartedly that small businesses need support in order to thrive, but we also acknowledge that for a very long time these exceptions for small businesses essentially allow them to operate more informally,” she said. “And that informality both leads to and encourages exploitation of workers.”

These types of pay transparency laws come at a time when workers have an upper hand, with 1.9 jobs available for every job seeker. And with decades-high inflation, people are increasingly demanding employers be upfront about pay.

Khawaja partially credits the pandemic for the resurgence in worker advocacy and growing demands for pay transparency by workers and legislatures alike.

“I think [the pandemic] really pushed a lot of workers across industries to reevaluate the conditions that they were working in,” she said. “And it was also the realization, I think, that a lot of workers are able to effectuate change within workplaces.”