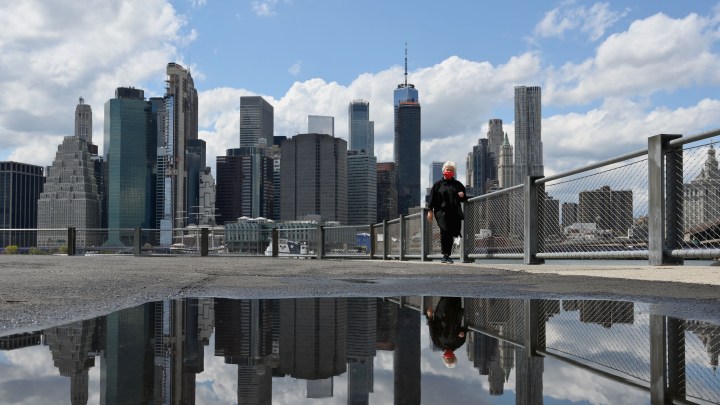 The law, which will take effect in April, will likely have the biggest impact on women and people of color, experts say. Angela Weiss/AFP via Getty Images

The law, which will take effect in April, will likely have the biggest impact on women and people of color, experts say. Angela Weiss/AFP via Getty Images

Last month, the New York City Council passed a bill requiring businesses with four or more employees to include a salary range in any job description. The law will go into effect in April.

The aim of the bill — passed by a 41 to 7 majority — is to reduce pay inequities, particularly those that frequently impact women and people of color.

The measure, which does not apply to domestic workers, is the result of more than a decade’s worth of advocacy.

“It took quite a long time to kind of raise awareness around the wage gap, around wage discrimination,” said Beverly Neufeld, president and founder of PowHer New York, a nonprofit aimed at promoting economic equality for women.

The law follows a wave of legislation nationwide mandating that employers be more transparent about a position’s salary range. Colorado, for example, requires that job postings include salary, benefits and bonuses. States including California, Washington, Connecticut, Nevada and Maryland have also enacted pay transparency laws in recent years.

According to Neufeld, though the move will most benefit those workers whose wages have been held back by systemic racism, sexism and ableism, its positive impact will be universal.

“It’s going to help all workers, but it’s also going to help all businesses, especially people who have been disadvantaged by the system,” she said. “And that, typically, is women and people of color, who, you know, have been subjected to conscious and unconscious biases in wage setting.”

Because pay transparency laws are relatively new in the U.S., measuring the exact economic impact on women and people of color can be difficult. But there are other measures we can look to, said Elise Gould, senior economist at the Economic Policy Institute.

Take salary history bans, for example, which prevent employers from asking job candidates about their past compensation.

“Let’s say you experienced discrimination in the past. That prior salary information should not be taken into account when deciding what an employer should be offering you,” Gould said.

And the biggest beneficiaries of those kinds of laws? Women and people of color.

Gould said we can also look to the impact of the General Schedule, the pay scale that dictates wages for most federal employees.

“The gender wage gap is smaller in the federal workforce than it is in the private sector,” she said, adding that similar trends can be noted in unionized workplaces, where there’s often more transparency surrounding pay.

Listing salary ranges in job descriptions isn’t only beneficial to potential job applicants who might otherwise lowball their worth during the job interview process. Knowing what people are being paid for doing the same job at other companies can be a tool workers use to renegotiate pay with their current employers.

“People underestimate how much other people are getting paid, which means that they perhaps underestimate their worth on the market,” Gould said.

Some companies and businesses are beginning to more frequently post job listings with pay ranges in them, regardless of whether pay transparency laws apply to them. That’s a good thing, Neufeld said, especially during the Great Resignation. It can make workers more informed and show how much companies value the work their employees put in. In that way, it hints at the company’s culture too.

“It reflects on their desire to be transparent and fair, and it shows respect for workers,” Neufeld said. “And I think we find that companies do better when they follow these best practices.”