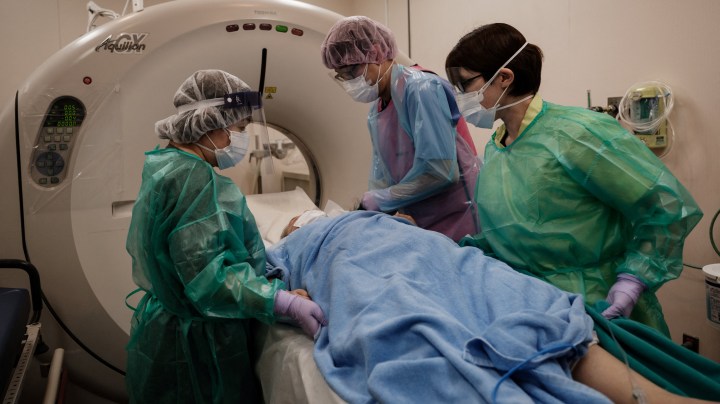 COPY
Hospitals low on contrast dye are doing some CT scans without it or are booking patients weeks or months in advance.  Yasuyoshi Chiba/AFP via Getty Images

Hospitals low on contrast dye are doing some CT scans without it or are booking patients weeks or months in advance.  Yasuyoshi Chiba/AFP via Getty Images
Listen Now

Erin Dwyer has been doing a lot of waiting. After a sonogram in December, she found out that she has a growth on her right kidney and had to wait months to see a specialist. Now she’s waiting for a CT scan.

When she called the radiologist’s office in early May to schedule it, “they were like, ‘OK, well, the earliest I can see you is like the first week of June,” said Dwyer, a graphic designer in Northern California.

When she asked if they could possibly fit her in earlier, she said she was told: “‘There’s actually this shortage of contrast dye, and everyone’s having a really hard time getting anything. And so we’re having to schedule appointments way further out than we normally do.’”

Hospitals all around the country are delaying scans and procedures for patients because of a shortage of IV contrast dye, a liquid that’s injected into the veins to make organs and blood vessels easier to see on a CT scan or an X-ray.

Nancy Foster, vice president for quality and patient safety policy at the American Hospital Association, estimates about half of hospitals in the United States get most or all of their IV contrast from GE Healthcare. Much of the dye is manufactured at GE’s plant in Shanghai. Because of the current COVID-19 lockdowns in China, that plant has been closed or operating at reduced capacity for weeks.

“At our institution, we were told that we will now, for an undetermined period of time, have only 20% of the supply that we’re used to receiving,” said Dr. Joshua Cooper, the director of cardiac electrophysiology at Temple University Health System.

IV contrast dye is used in all sorts of scans and procedures — some urgent, some less so.

“If you present in an emergency room with the symptoms of a stroke or some kinds of heart disease, we will likely do a scan on your heart or your brain to make sure we know what’s going on in there,” said Nancy Foster, vice president for quality and patient safety policy at the American Hospital Association.

If you’re in a bad car crash, doctors will likely do a scan with IV contrast dye to check for internal bleeding. If you’re getting a stent, they might use contrast to see your arteries better and be sure they’re putting the stent in the right place. And for many cancer patients, Foster said, “it’s used quite frequently to monitor tumors that are being treated, to keep track of the progress that we’re making.”

Hospitals that get contrast dye from GE are now having to find ways to stretch what little supply they have. They are doing some scans without contrast, or, when possible, ordering an MRI or ultrasound instead of a CT. Many are also booking patients weeks or months out.

“The goal here is to make sure that the place doesn’t run out completely, because if they do, then they won’t have any contrast left to do those necessary scans,” said Dr. Matthew Davenport, vice chair of the commission on quality and safety at the American College of Radiology.

GE Healthcare declined to talk for this story, but Davenport said the company is telling hospitals it expects supplies to start getting back to normal by the end of June. Meanwhile, hospital administrators are thinking about how to prevent similar shortages in the future — in part, by diversifying their supply chains.

“I think this is a ‘too many eggs in too few baskets’ problem,” Davenport said.

Hospitals will often have one, maybe two suppliers for something like IV contrast dye; the pandemic has highlighted how risky that is.

“It is going to force the entire medical industry to re-look at supply chain and consolidation, and understand that they do have to have alternatives,” said Dr. James McCarthy, the chief physician executive at Memorial Hermann Health System in Texas.

“I’ve been practicing medicine in Houston for 21 years, and I can tell you for the first at least 18, I never once thought about supply chain.”

But after the personal protective equipment shortages in the early months of the pandemic and this shortage of IV contrast dye, McCarthy said he now thinks about it all the time.

Supply chains are now on Erin Dwyer’s mind a lot too, which is something she never expected as a patient either.

“People were getting annoyed when it was toilet paper, and we were getting our furniture delivered from West Elm later than normal,” Dwyer said. “That kind of stuff was, I think, what we all thought of when we first heard supply chain issues. And when it’s starting to affect things that keep us healthy or alive is when it really starts to get scary.”

It’s been almost six months since she found out about the growth on her kidney, and she still doesn’t know what it is.

She was supposed to get her CT scan the first week of June. But she just got a call from the radiologist’s office. Because of the contrast shortage, it’s been pushed back six more weeks to mid-July.