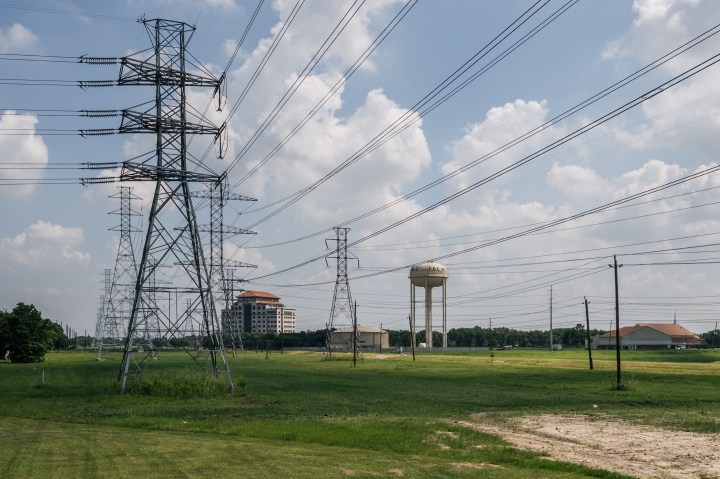 Installing above-ground power lines may cost a fraction of underground utilities, although the benefits of buried infrastructure can outweigh the initial costs. Brandon Bell/Getty Images

Why do some neighborhoods have underground utilities? How does that come about? What are the pros/cons of having the utility poles underground vs. above-ground?

Wildfire season will soon descend upon California, which emerged last year from one of the deadliest, and costliest, blazes in the state’s history.

Natural disasters ranging from wildfires to hurricanes have invigorated debates about whether utility companies should take the initiative to put their electricity networks underground. However, that process comes with a hefty price tag.

“People want to underground them in places like California. But that is very, very expensive to do in practice,” said Leah Stokes, an associate professor of political science at the University of California, Santa Barbara. “So you do need resources in that case at the state level in order to pay for undergrounding those kinds of lines.”

The advantages of above-ground utilities

The high price has served as a deterrent. An estimate from Edison Electric Institute back in 2004 placed the cost of setting up underground utilities at $1 million a mile, 10 times the cost of an overhead power line. That gap is starting to narrow, according to Clint Andrews, a professor of urban planning at Rutgers University.

Larry Blank, an associate professor of economics at New Mexico State University, said he’s seen cases in which the cost of undergrounding was shared among the entire service territory, even though only one city was required to underground its utilities. Some people, he said, might perceive that as unfair.

Stokes of UC Santa Barbara said that electric systems are very old, some dating back to the 1800s, which means that some areas developed their above-ground power lines before undergrounding was an option.

While above-ground utilities may be more vulnerable to outages, the outages that occur underground may be more difficult to fix, she added.

Geographic circumstances also dictate which setup may be appropriate for a given region.

“If you’re living in a rural area where there’s a lot of distance between houses, the cost per mile to put it underground is higher from an individual utility-user perspective,” Stokes said.

She explained that you may have to run a line out for a mile just to reach one home in a rural area. Whereas in a denser, urban environment, tens of thousands of people may be living closer together.

The advantages of underground utilities

Underground utilities can evade some of the risks associated with overhead transmission, like certain natural disasters and accidents, experts say.

For some regions, it’s preferable to have underground facilities because of the high frequency of storms, Blank said.

Then there are more minor concerns about the visual blight of power lines obscuring your skyline.

“It looks nicer when you don’t have a bunch of wires everywhere. And that’s a strong consideration, especially in wealthier communities or new urbanist-type communities, where they’re trying to go for an aesthetic that feels uncluttered and appears friendly,” Andrews said.

Andrews observed that wires run down the streets in his town of Highland Park, New Jersey, which is middle class, unlike in the wealthy town of Princeton, which undergrounded the utilities in its downtown district.

Andrews noted that dense downtown areas in general are especially likely to have underground transmission because there’s no space for utilities above-ground. “Tall buildings and wires don’t go together,” he explained.

Some cities, like Riverside, California, have opposed above-ground power lines over concerns that they would ruin residents’ views and bring down property values.

Studies show that having a home near a power line could decrease its value compared to similar homes away from the facilities. The Appraisal Journal examined sales on the West Coast, finding that homes near transmission lines in Portland, Oregon, sold for about $5,000 less, while in Seattle the price gap was about $12,500.

Although above-ground utilities could affect housing prices, Andrews said, you should also take into account the public amenities a neighborhood offers, among other characteristics.

Some regions, like Santa Fe, New Mexico, have sunk their utilities to preserve the character of the area, said Blank at New Mexico State University.

“In the case of Santa Fe, you’re talking about a very historic city,” Blank said. “They want to protect the original architecture. I cannot build a building in Santa Fe without conforming to very specific architectural requirements — even grocery stores.”

Plans for the future

While both setups come with advantages and disadvantages, Andrews said, each plays an important role in delivering energy.

“I think it would be unrealistic to imagine that we would need to dig a tunnel all the way across California to Arizona to replace the electric transmission towers that go across,” he pointed out.

However, some regions are committed to changing their current infrastructure. PG&E is launching an underground project that will cost an estimated $25 billion.

In California, Gov. Gavin Newsom has a budget that includes funding for climate adaptation, which would entail putting utility lines underground, Stokes said. (Although she noted that “to really reduce wildfire risk, what we have to do is stop burning fossil fuels and get on top of the climate crisis.”)

And in Florida, some utility companies have filed proposals to build underground power lines to shield them from storms.