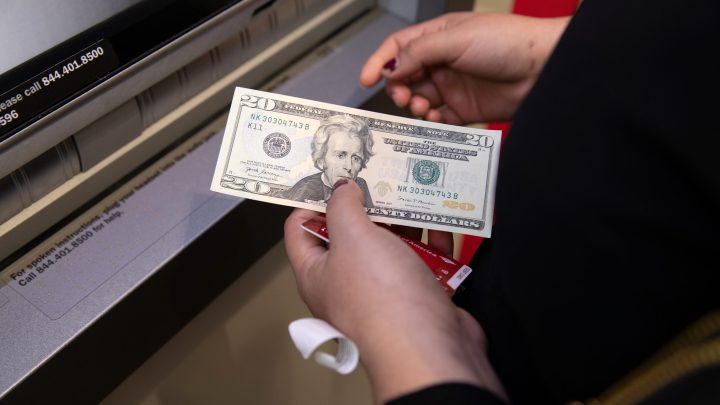 The bank is an “appropriate place” to keep your money for short-term goals, one expert tells us. But other investment strategies might be better suited for long-term goals. John Moore/Getty Images
I've Always Wondered ...

The bank is an “appropriate place” to keep your money for short-term goals, one expert tells us. But other investment strategies might be better suited for long-term goals. John Moore/Getty Images

When the Federal Reserve raises interest rates, the rates on your savings accounts typically increase in response. But while the Fed has hiked rates by a total of 75 basis points since the beginning of the year, savings rates have barely followed suit.

Since April 2021, the average nationwide interest rate on savings accounts largely have stood at 0.06%, barely inching up to 0.07% last month.

That’s because banks have too many deposits at the moment, financial experts say. As of last month, commercial banks held more than $18 trillion.

“You could say that they are flush with cash, and that therefore, they have no incentive at the moment to offer more attractive rates,” explained Angelo Kourkafas, an investment strategist at Edward Jones.

In 2020, at the beginning of the pandemic, households saved more and borrowed less because they weren’t able to spend money due to the lockdown, Kourkafas said. Congress also approved stimulus packages that amounted to $803 billion worth of payments.

On top of that, consumers were risk-averse and wanted their money in cash, said Ken Tumin, senior industry analyst at LendingTree and founder of DepositAccounts.com, a bank account comparison site. Deposits rose sharply from $13.4 trillion to $15.3 trillion between February and May 2020.

In 2020 and 2021, personal loans and credit card balances declined.

“So banks actually saw less growth on their loans, while they had big growth in deposits,” Tumin said. “The whole purpose of deposits is to fund loans, so they basically did not need to attract deposits to fund those loans.”

But while savings rates are low on average for traditional brick-and-mortar banks, Tumin said online savings accounts yield a higher return. Some banks are offering rates as high as 1.25%.

He said online banks are faster to respond and have increased savings rates by about 8 basis points this year (compared to a paltry 1 basis point increase in the national average).

Tumin said online banks offer higher rates because they don’t have to maintain an expensive branch network and there’s greater competition because consumers can swiftly move their money from bank to bank. People using traditional banking services, on the other hand, tend to leave their savings in place because they aren’t particularly “rate sensitive.”

Online savings rates eventually may push more traditional brick-and-mortar banks to raise their rates so they can compete, he added.

And Kourkafas said he thinks as the Federal Reserve continues to raise rates, returns on your savings account could slowly increase in the coming months.

Consumer savings may decline, partly because of rising inflation, he said. So banks may eventually want to attract more deposits.

The Fed is expected to hike rates five more times this year and is considering raising them by 50 basis points at its next two meetings. Fed Chair Jerome Powell also told “Marketplace” host Kai Ryssdal in an interview that the Fed is “prepared to do more” and that a 75 basis point increase isn’t off the table.

A big question going forward, Kourkafas and Tumin said, is: Will there be a recession? Some major banks say yes, although some economists think it can be averted.

Despite the low savings returns, Tumin said the bank is an “appropriate place” to keep your money if it’s part of an emergency fund or your short-term goals and expenses. But for long-term goals, you should think about investing in options like mutual funds and exchange-traded funds.