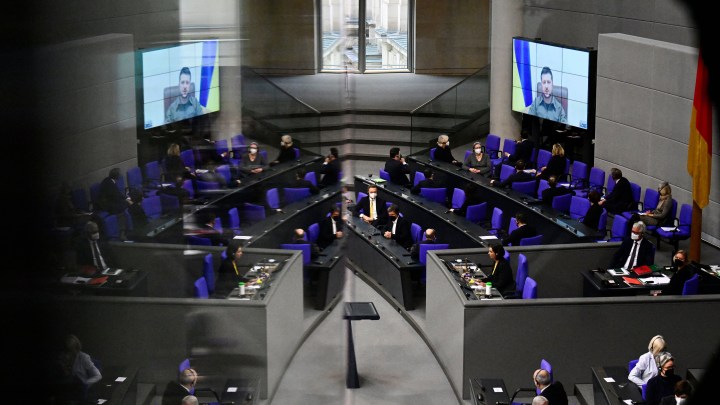 The European Union has banned the import of Russian coal in the latest set of sanctions over the invasion of Ukraine, but the 27-nation bloc has — so far — stopped short of an immediate ban on Russian oil and natural gas, even though Ukrainians have been urgently demanding it and the action could prove far more damaging to the Kremlin.

The main obstacle to such a move within the EU has been Germany. The country depends on Russia for more than 50% of the natural gas it uses. The government in Berlin claims that an instant embargo would plunge its economy into recession and put tens of thousands of its citizens out of work.

When Ukrainian president Volodymyr Zelenskyy addressed the German parliament by video link recently, he berated lawmakers over this issue. In effect, he accused the Germans of willfully allowing themselves to become hooked on cheap Russian gas while ignoring the danger of becoming dependent on an autocratic regime, solely for commercial benefit. He suggested that Germany had put its economy above every other consideration.

But in the past, many German politicians and business leaders have justified an increase in trade with autocratic countries on moral grounds. They cited a policy known as “Wandel durch Handel,” or change through trade. The thinking was that the more business that Germany did with autocracies like Russia and China, the more likely such countries were to become less authoritarian and more democratic.

“Economic exchange will help to build a peaceful world, that was the idea,” said Ralph Bollmann, a biographer of former leader Angela Merkel. “The thinking was that economic growth and wealth will directly lead to more democracy and more freedom.”

The idea was widely accepted in the West, but Germany embraced it more enthusiastically than most because it is a major exporting country. The idea fueled what Bollmann described as “the German economic model, which depends on exporting to China especially and importing cheap gas from Russia.”

“The problem is that this idea is now in deep crisis,” Bollmann said. “It doesn’t work anymore.”

Certainly, the thesis would seem to be in tatters following Russia’s invasion of Ukraine. But Janis Kluge, a senior associate at the SWP German Institute for International and Security Affairs, said that change through change has long been a convenient, self-serving and — as it turns out — dangerous policy.

“Germany intensified its business relationship with Russia, although there was no sign this would lead to any positive change in Russia, and in the end it might have even emboldened [Russian President Vladimir] Putin to do what’s he’s doing right now in Ukraine,“ Kluge said, adding that the policy certainly helped Putin pay for the invasion.

“These tanks that are rolling into Ukraine have been financed by our energy revenue, the money that we sent to Moscow in the last years. And, of course, this is painful. It’s a rude awakening.”

Also painful, according to Tim Rühlig of the German Council on Foreign Relations, is the dawning realization that, thanks to the change through trade policy, Germany has become dependent on some very autocratic regimes and that has reduced its scope for independent political action.

“Those dependencies may limit the foreign policy choices we have, the political room for maneuver,“ he said.

Germany’s reliance on Russia for more than half its natural gas, for example, explains why the country resisted the calls for immediate sanctions on all Russian energy. And could Germany’s failure to denounce some of China’s alleged human rights abuses be linked to German carmakers’ dependence on China as an export market?

“Around a third of German carmakers’ sales are being made in China. That is, of course, enormous,” Rühlig said.

Germany’s biggest automaker relies even more heavily on China. Volkswagen runs more than 30 factories there and, in recent years, has derived more than 40% of its global sales and profits from China.

“If you look at the importance of the auto industry for the German economy, then you get a rough understanding of how overdependent we are on China at the moment,” Rühlig said.

Rühlig is also calling for a major restructuring of German trade. “I’m not saying that we shouldn’t trade, but we do need to diversify our trading partners. We shouldn’t put all our eggs in one basket and hope for the best.”

Germany has now committed to weaning itself off Russian energy, albeit gradually in the case of natural gas.

The Russian invasion and Putin’s threats to cut off gas supplies to Europe have profoundly shocked Germany’s political and business establishment. But calls to diversify away from China have met stiff resistance.

“There’s no reason to reduce trade, to lose a market, which is huge and is still growing,“ argued Volker Treier of the German Chambers of Commerce. “Yes, we have been disappointed when it comes to Russia. But China is different. We are mutually dependent on each other. China is also dependent on our investments, on us creating highly productive jobs there.”

Germany’s urge to trade remains pretty overwhelming. Exports account for almost half the economy. But after the invasion of Ukraine, the Germans can surely no longer claim when trading with autocracies that they’re also promoting freedom and democracy.