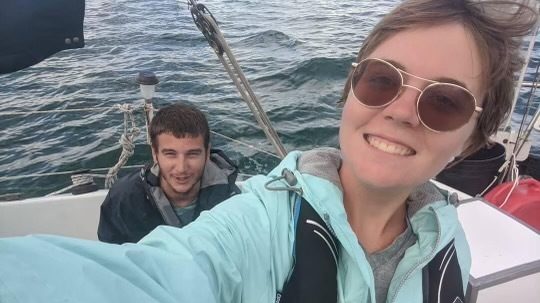 Rising housing costs and a desire for adventure have convinced some people to hit the road, trading their apartments for camper vans, Airbnb or converted school buses.

“We looked at a bunch of YouTube videos about #Vanlife,” said Sunni Blanning, a 24-year-old server-bartender who grew up in Florida and Georgia. “And through that, we found out that people live on sailboats.”

Blanning and her fiance, 25-year-old welder Brandon Bunch, had long dreamed of traveling around the United States.

“We also knew that, like, traveling in a traditional sense, just when we have off time from work, especially coming from our low salaries, was going to be hard,” Bunch said. “So we kind of had to look at, like, nontraditional ways to go about traveling and exploring.”

Though they originally planned to save up for a van, as they learned more, they realized a sailboat would work better for their lifestyle.

“I am kind of afraid of water that I can’t see the bottom of, so it took a bit of convincing,” Blanning said. “But after doing more research, I realized that I would probably be really claustrophobic in a van.”

After a few years of saving for and dreaming of life on the water, Bunch and Blanning purchased a 27-foot sailboat named Moondance for $5,000.

“We’ve put in a lot of sweat equity since then,” Bunch said. “We have at least twice what we bought her for in her.”

Upgrades include revamping the electrical system, adding a new freezer and installing a toilet, or “head,” in an old liquor cabinet.

“That doesn’t actually have a door — it’s just kind of in old cabinet right next to our V-berth, which is where we sleep,” Blanning said. “And then we have a cat, so we have a litter box under the V-berth.”

Blanning said Mocha-Bean, a 4-year-old Siberian forest cat, “adjusted super quickly” to living on a sailboat. “So far the cat’s only made it into the water one time,” Bunch said.

Since purchasing their boat in the spring of 2020, Blanning and Bunch have traveled around the tip of Florida, throughout the Florida Keys and then north past Miami. They’re currently docked in Titusville, Florida.

“My favorite thing is the stars at night,” Bunch said.

Along the way, Blanning and Bunch have picked up jobs when they’ve needed to.

“Overall, I would say our monthly expenses now on average are a lot cheaper than living in an apartment in Atlanta,” Blanning said.

In most of Florida, anchoring is free. If they choose to be closer to shore and services, they can also park at a dock or a mooring field.

“The one we’re currently at is around $260 a month,” Blanning said. “You do have to pay for water sometimes, but the mooring field we’re at now has free water.”

By keeping expenses low, they’re able to work less. “We don’t have to work every single day just to survive,” Blanning said.